Making Sense in the Face of Tragedy: Scapegoating Climate Change

By Kiara Goodwine and Barbara Castellini 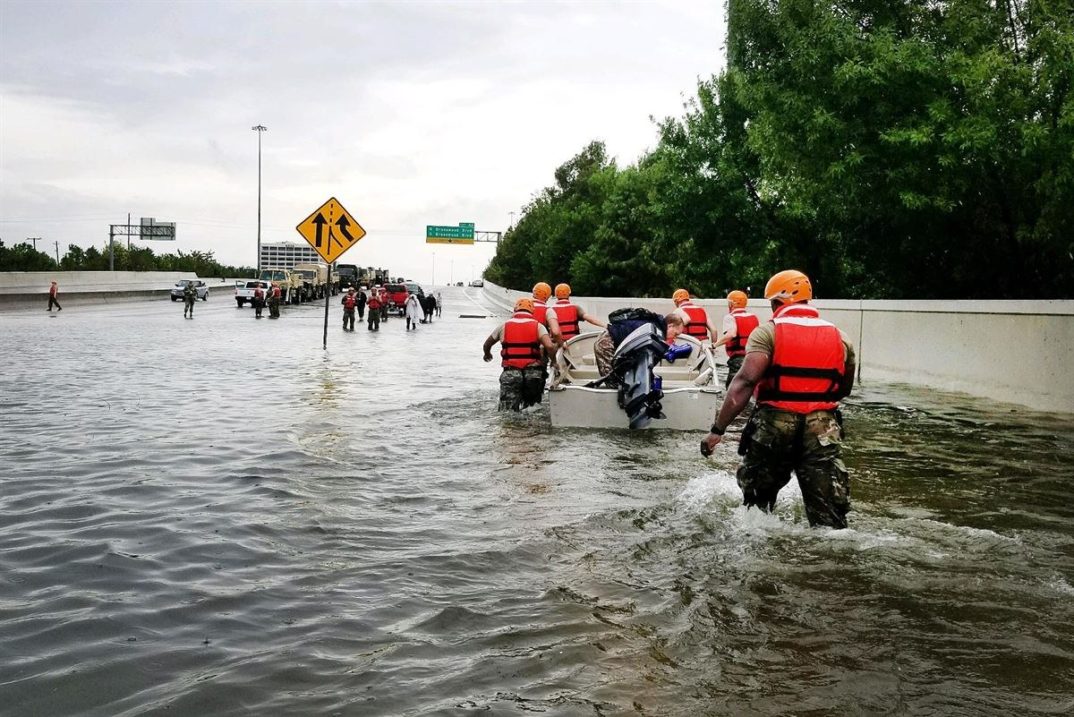 It seems like a nightmare come true – two record-setting hurricanes batter the United States in less than a week. Hurricane Harvey, a category 4 hurricane, has been called “the most destructive hurricane” in the United States in the past 13 years. Hurricane Irma is the strongest hurricane ever recorded in the Atlantic and  left disaster in its wake in many Caribbean islands and widespread flooding and property damage in Florida. Time has reported the death toll for Hurricane Harvey to be at least 70 and at least 24 for Hurricane Irma. These preliminary numbers could continue to rise, along with calculations of billions of dollars in damage. The public seeks an explanation as to what caused the severity of these storms. Most importantly, many question if human-induced climate change had a role in causing these hurricanes.

Climate scientists have identified several ways in which there is a correlation between these large scale hurricanes and climate change. Although the hurricanes were not caused by climate change, they were seriously worsened by it. Global temperatures have increased steadily the past decade. Scientists agree that with every 1° C increase in air temperature, the atmosphere can hold 7 percent more water vapor, which increases rainfall within the hurricanes. Warmer ocean temperatures also contribute to a warmer atmosphere. Some experts suppose that climate change has shifted ocean currents, causing warmer currents to replace colder ones closer to North America thus placing hurricanes closer to coasts. Finally, rises in sea levels, brought about by melting ice and increased temperatures, causes hurricanes to surge. This surge creates massive flooding and more damage to infrastructure. The science therefore is conclusive that climate change is severely worsening the effects of hurricanes.

However, weather and climate are also two different things – that’s a fact. According to NASA, “The difference between weather and climate is a measure of time.” While weather refers to short term atmospheric conditions, climate refers to the long-term atmospheric conditions. This distinction often complicates our ability to refer to climate change as the cause of one extreme weather event. However, scientists have developed methods to help bridge the gap between weather and climate. By using extreme event attribution, scientists can study whether or not climate change will increase the likelihood of extreme weather events in certain areas. The National Ocean and Atmospheric Agency states that while extreme event attribution “can tell us whether global warming made (or will make) an event more likely than it would have been without the rise in greenhouse gases from burning fossil fuels,” it won’t answer “whether global warming ‘caused’ a specific event.”

However, the question remains: can and should climate change be considered when discussing Hurricane Harvey and Irma? Do certain groups have more license or responsibility to discuss climate change’s influence than others? And most importantly, how can we make such determinations, while maintaining respect for lives harmed or lost?

Some might argue that the state has the most responsibility in speaking about climate change’s connection to natural disasters. Scott Pruitt, Trump’s appointed head of the Environmental Protection Agency, called such debates insensitive to the victims of the hurricanes. In an interview last week, Pruitt stated that, “To have any kind of focus on the cause and effect of the storm; versus helping people, or actually facing the effect of the storm, is misplaced.” It is important to note that Pruitt has cut regulations on fossil fuel emissions and has been labeled by many a ‘climate change denier.’ In his interview with CNN, he goes on to say that the EPA is only focused on providing aid such as gas and water to those in Florida. Additionally, he boasts that they are closely monitoring toxic waste sites. In regard to climate change, he argues that Congress ought to address the issue, but that aiding Floridians is the EPA’s primary goal.

While policy heads like Pruitt don’t believe that their job is to address the connection between climate change and the hurricanes, some disagree. Many news outlets are quick to criticize Trump and his administration for its lack of climate change policy in reaction to Hurricanes Harvey and Irma. Journalists from the Washington Post point out that since taking office, President Trump has removed incentives to switching from fossil fuels to clean energy, cut funding to climate change research, and he has rescinded President Obama’s bill to update infrastructure in coastal cities vulnerable to flooding from rises in sea levels. They also make the case that policy is important in both preventing horrible hurricanes like the ones the country just experienced and in aiding communities affected by the climate change disasters.

Others might argue that those most affected by the disasters have more license to speak on them. Leonard Pitts Jr., a columnist for the Miami Herald, uses Harvey and Irma as a backdrop to demonstrate how “dangerous, delusional, and irresponsible” denying climate change is. He points the finger at Trump, Republican pundits and politicians, using the fact that “parts of Houston are navigable only by boat and a monster storm is engulfing on Florida” as proof that climate deniers bet our lives.

And finally, some might argue that environmental organizations and scientists have the most knowledge and therefore should hold the microphone. Environmental organization Greenpeace published an article on its website titled, “Two Massive Hurricanes in Two Weeks Is Not a Coincidence, It’s Climate Change.” While this title may be misleading, based on what we know about extreme event attribution, many would argue the connection is worth a national discussion.

It seems like everyone has something to say about the connection, or lack thereof, between climate change and Hurricanes Harvey and Irma. There is a divide in opinion about what is more important: the responsibility to protect the victims versus the obligation to acknowledge climate change’s role. Does the standing of the person commenting on these disasters matter-whether they be a state official, a Miami resident, or an environmental organization?

One way to answer this question would be to decide who has the most stake in the situation. Turning to the victims of the disaster, like Leonard Pitts Jr., would follow this path of logic. Another method is to consider who is the most knowledgeable about climate change and hurricanes, which would most likely be organizations like Greenpeace. Others might turn to those in positions of power, such as Scott Pruitt, for the ultimate course of action.

What is most clear is that there is a connection between human actions that cause climate change and the severity of storms such as the ones just witnessed. With the definitive science mentioned above, it is unethical for anyone to deny or ignore the role climate change has had in intensifying these hurricanes. However, the question of how to address climate change’s role still remains. When dealing with tragedy, we must be careful, who, or what, we scapegoat.