On Lying When There is No Truth 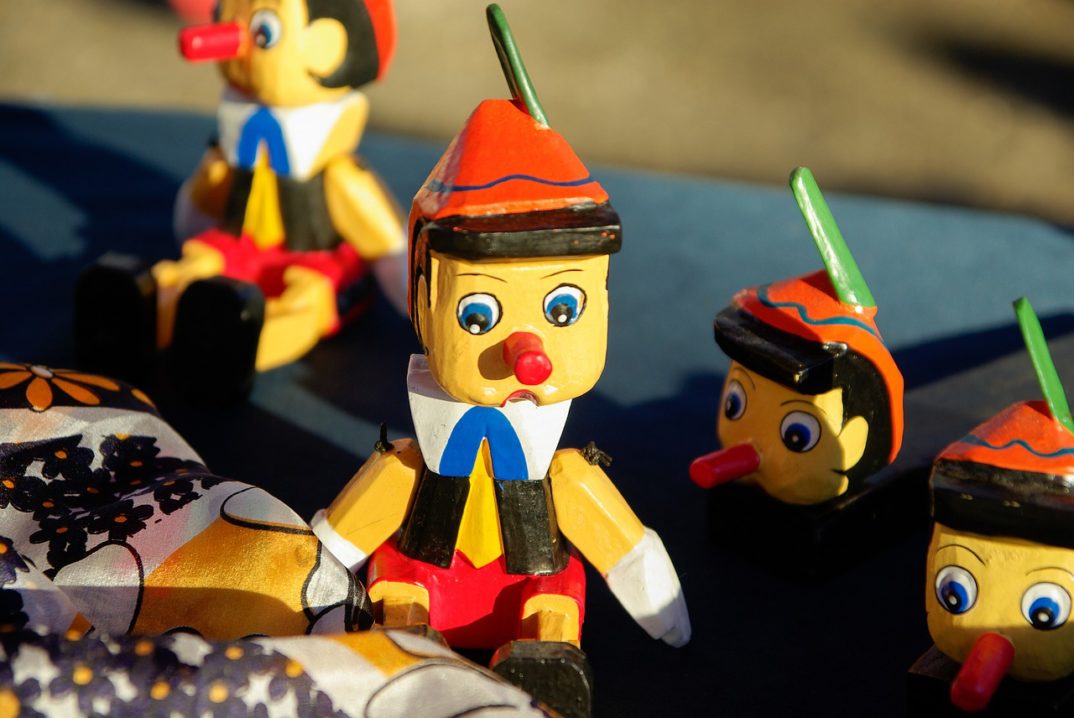 “Pinocchio” by Jackmac34 is licensed under CC0 Public Domain (via Pixabay)

Augustine wrote about lying because, of course, everyone does it. And not just about little things. Even Augustine’s co-religionists were saying anything they could to win converts to their side. This was bad. Lying about faith and salvation degraded and debased Truth, the foundation of Augustine’s spiritual values. Augustine worried that a person converted by a lie had never accepted the Truth, and so might not really be saved.

Theological questions are matters for the faithful, but there is an ominous analogy for our secular values. Today, politicians lie to win votes and accomplish what they honestly believe is good. These lies debase our institutions, preclude further agreement, and undermine the very foundations of a diverse democracy.

Four paragraphs in, you know President Trump is coming. I don’t mean to stir controversy. Trump’s range of fabulism and falsehood is stunning, but he is probably not lying to us. In response to the neo-Nazi Rally on August 11, Trump tweeted that counter-protesters did not have proper permits. They did. In response to a terror attack in Barcelona, he tweeted a false story of a mass execution of prisoners in the Philippines, that, had it occurred, would have been a war crime. However, it is not lying when you assert something you actually believe. To the extent Trump’s statements have coherent cognitive content, he probably believes them. If he is not lying, someone is lying to him.

The modern world differs from Augustine’s. Our diverse society has no accepted Truth.  We may not even agree on facts. But even without an accepted Truth or Falsehood, we can still intend to deceive.  We can still lie.

Augustine struggles to explain how complicated these intentions can be. When I believe something is true, but know that you do not trust me, so I assert the opposite of what I believe with the intention that you reject what I say as false, and believe what I actually believe is true, have I lied to you?  What if my initial belief, and my belief in your lack of trust are false?

I used to think these were academic questions. But, when Trump condemns Nazis, are his words merely a double-switch secret dog whistle to racists? Is his condemnation of the alt-right a lie? The racists think so. The only person who might know is Trump, and his veracity is precisely what’s in question. In any complex situation, it is impossible to tell if a person is lying. Augustine recommends forthright honesty or silence.

After failing to provide a clear definition of lying, Augustine asks the much more interesting question: Can we ever gain something truly good by lying? His answer is “no.” Augustine’s values are clear. It is impossible to gain any spiritual good by means of a lie, but every lie damages your soul and causes spiritual harm. This should be a clear choice. He even claims that it is wrong to lie in self-defense. The benefit is a slightly longer mortal life. The cost is your immortal soul.

To those of us with merely secular values, this sounds extreme.  But Augustine’s larger point is important. There are goods that are above short term expedient trade-offs. Cooperation is such a secular good essential in a diverse democracy. Cooperation and compromise require an honest presentation of what we believe are facts.

Not all facts are easily verifiable, and honest people will not always agree. It has been reported that the majority of confederate monuments were erected in the Jim Crow and Civil Rights eras. This is a complex, hard-to-verify fact. The date when each monument was erected can be traced, but this is painstaking work (this is why historians have grad students). What counts as a Confederate monument is a philosophical question. The earliest noted in a study by the Southern Poverty Law Center are from 1861.

I’m not sure that I would consider a monument erected during the Civil War as a Confederate monument. Reasonable people can dispute criterion, but the integrity of the people presenting facts is an essential starting point. Cooperation requires that we rely on their basic honesty, but not their infallibility. Judging by my Facebook feed, people are so used to being lied to that we dismiss almost every “fact” as simply made up.

Trump is a prolific fabulist. For sheer quantity and audacity of bullshit he may never be surpassed. But he has not achieved the mastery of Bill Clinton. “I did not have sexual relations with that woman.” And his follow up “What does ‘is’ mean?” were works of art. I’m an analytically trained philosopher. I understand the complex and baffling meaning of the word “is.” Clinton’s was not an enlightening exposition.  Most political and economic issues are bafflingly complex and well beyond the capacity of most people to grasp without serious intellectual investment. Our democracy requires that they be explained clearly and honestly. Clinton’s lies manipulated complexity to make us distrust explanations of topics that are beyond our understanding.

Twenty years later, subtle and complex points are facilely dismissed as deceptive semantics. We cannot reasonably vote about taxes or job policy because when we don’t sufficiently understand an issue we can’t tell deception from honesty. We have been lied to so often about things we could not fully understand for ourselves, that we have no foundation for compromise and cooperation.

You might think that trust is the good we’ve lost. But lack of trust is in many ways a virtue in a diverse democracy. Lack of trust is why we investigate to find facts ourselves. I’d like people to honestly present the facts as they understand and believe them. I don’t trust them to do my work for me. If they similarly trust me to present additional facts and honest arguments then we can cooperate. If either of us is presenting “alternative facts” and mendacious complexity, then one side may defeat the other, but cooperative or compromise solutions are precluded. Politics in a diverse society should be about finding cooperation and compromise between competing values and goods. This requires honesty, especially when there is genuine disagreement about facts.