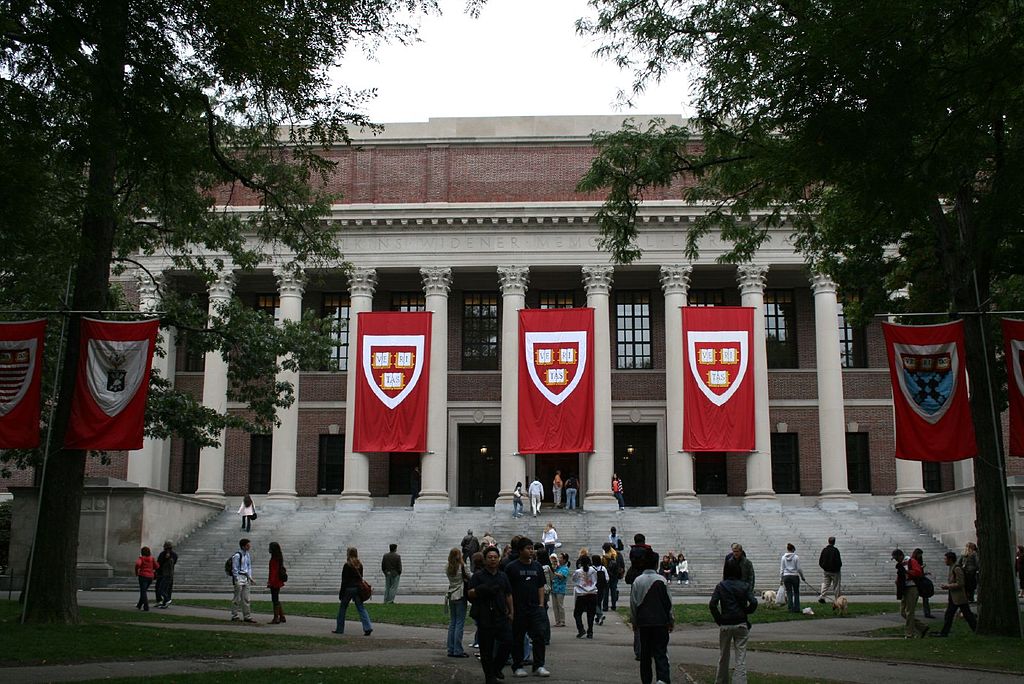 “Harvard University Widener Library” by Joseph Williams is licensed under CC BY 2.0 (via Wikimedia Commons)

A recently released report from a Harvard panel of faculty members recommended that Harvard adopt an outright ban on student participation in unrecognized social clubs such as “Final Clubs,” fraternities, and sororities. These organizations have not had official recognition from Harvard since 1984, when such formal recognition was rescinded because these social clubs refused to end membership policies discriminating on the basis of gender. In May 2016, Harvard decided to penalize anyone who joins these single-gender social clubs by banning student members from “holding athletic team captaincies and leadership positions in all recognized student groups. They will also be ineligible for College endorsement for top fellowships like the Rhodes and Marshall scholarships.” The report from the faculty panel takes the May 2016 policy to its natural conclusion: an outright ban.

Student clubs like fraternities and sororities seem commonplace on American college campuses; however, Harvard is not the only university to fight the proliferation of single gender social clubs. The Harvard report cites peer institutions Amherst, Bowdoin, Middlebury, and Williams as other colleges that have banned fraternities and other similar organizations from their campuses. As justification for their radical recommendation, the report cites the principles of inclusiveness and equality, claiming that these principles, which are at the heart of Harvard’s educational mission, are harmed by the growing social influence of selective social clubs. The report recognizes and supports the efforts of the May 2016 policy to punish single gender social clubs for their promotion of discrimination based on gender, but the report believes that even co-ed social organizations would violate these principles of equality and inclusion.  While recognizing the sense of belonging some gain at being part of these organizations, the report claims that this “comes at the expense of the exclusion of the vast majority of Harvard undergraduates.”

The committee was not unanimous in its recommendation, and one committee member provided a dissent against the proposal in an appendix added to the report. He argued, “The sanctions policies have involved a conflict between competing goods: on the one hand, respect for student autonomy and freedom of association; on the other hand, nondiscrimination and inclusivity. The report strongly favors the latter over the former goods. I continue to favor a balance more on the side of student autonomy because I am unconvinced that the policy, when implemented, will solve the latter problems.”

This dissent frames the dispute over the unrecognized social clubs as a disagreement about human nature and the role played by social institutions in shaping human character. As Conor Friedersdorf observed in the Atlantic, “The faculty panel’s approach is quintessentially progressive. As they see it, the impulse among undergraduates to form exclusive in-groups is not hard-wired and ineradicable; rather, it is the result of flawed institutions affecting malleable individuals, and can be eradicated so long as authorities have the power to limit freedom of association.” This progressive view echoes Swiss philosopher Jean Jacques Rousseau’s central view that humans are good by nature, but become corrupted by social institutions.

As such, good laws are needed to make good citizens, and strong legislators are needed to inspire a sense of collective identity. For Rousseau, good laws advance the common interest of the community at large, rather than the private interests of each individual citizen. For the faculty committee supporting the ban on social clubs at Harvard, the view that the social clubs foster discrimination was important, but equally important for them is the idea that these social clubs undercut the feeling of belonging to the larger Harvard community: “Aside from issues of the discrimination and inclusion/exclusion practices of the USGSOs, students who belong to the USGSOs may be alienated from a sense of belonging to Harvard, drawn as they are into private enclaves and their regulatory bodies.” Like Rousseau’s strong legislators, the faculty members aim to make the students better by enacting policy that will instill a stronger identification with Harvard as a whole.

One can see where critics of this Rousseauian vision of human nature might object. By conceiving human nature as capable of being profoundly shaped by policy, the vision gives impetus to would-be social reformers to design policy to force people into the “right” attitudes and behaviors. This threatens the right of individuals to decide for themselves with whom they want to associate, as well to decide how they want to express their own identities. This can be seen in the dissenting faculty member’s support for the goods of autonomy and freedom of association over those of non-discrimination and inclusivity. It is not that “non-discrimination and inclusivity” are not goods; rather, these goods should not be pursued by sacrificing autonomy and freedom. Moreover, human nature may not be as flexible as the Rousseauians believe, and such a radical policy might even fail to foster inclusivity.

Whether Harvard decides to adopt the recommended total ban remains to be seen; what is certain is that debates within the Harvard community over the value of these private social clubs will continue, just as debates in Western civilization over private freedoms and social goods have continued to shape our social organizations over time.