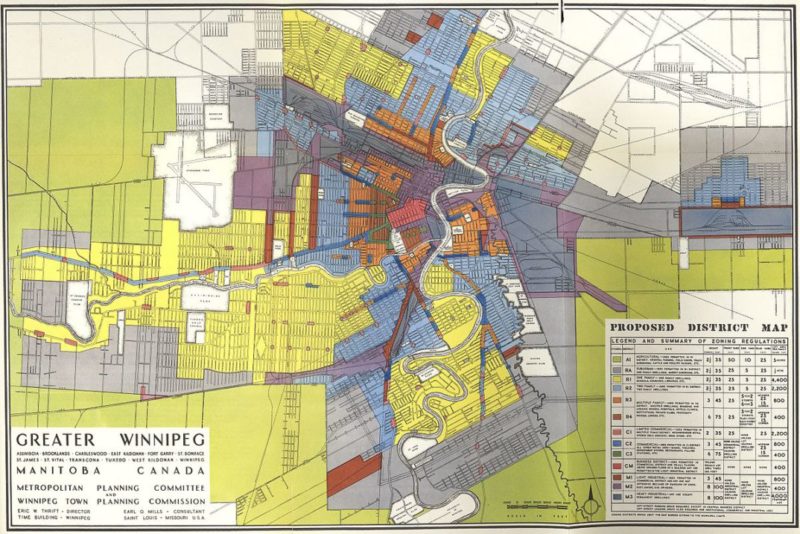 “Example of Single-Use Zoning Regulations” is licensed under CC BY 2.0 (via Wikipedia)

As part of a legal settlement, Bernards Township, a small, affluent town in central New Jersey, will pay a 3.25-million-dollar settlement to a local Islamic group.  The Justice Department filed suit. Together with the Islamic group, the department alleged that the township had changed their zoning laws to prevent a mosque from being built to service the area’s Muslim population.

The town contends that their restriction was reasonable.  They maintain that the land intended to be the future location of the mosque does not have sufficient room for parking for this particular congregation of people.  They support this contention by appealing to the idea that, because Muslim worship takes place on Friday evening—a weekday—congregants would need to drive to the mosque from work. This would necessitate a larger area for parking than might be needed for a house of worship that conducts its services on days on which congregants can more conveniently walk to church from their homes.

The township required the proposed Mosque to provide a minimum of 107 spots for its 150 congregants.  The standard employed in this case differs dramatically from the standards that apply to other houses of worship in the area.  Other religious denominations are only required to provide enough parking spots to accommodate one in three members of their congregation. The judge pointed out that Jewish members of the community also worship on Fridays, but were not subject to the parking requirements the township was applying to the mosque.

The reason offered for the ban strikes many, including the district court judge who ruled the zoning policy unconstitutional, as suspicious. Its construction was a very contentious issue in the local community.  Some community members were quite welcoming.  Others handed out pamphlets, encouraging local action to prevent the building of the osque.  Among other things, the pamphlets claimed that, “each Muslim is attempting to follow and obey their book’s rules, which is [sic] to kill, and destroy, and to take over the homes of those who are not Muslim.”

Advocates of the zoning restriction argue that though there is, regrettably, anti-Muslim bigotry in the town, such bigotry did not in any way provide motivation for the zoning decision made by the Planning Board or Township Committee.  Supporters of the committee are insistent that the board did everything in their power to pave the way for the building of the Mosque.  It simply wasn’t possible, they claim. However, as the New York Times reported, some of the members of those committees have spoken out publicly against Islam in the past.  For instance, John Malay, a member of both the Planning Board and the Township Committee reportedly wrote, “As a religion, Islam owes its size and influence to a tradition from Day 1 of forced conversions through violent means.”  Statements of this type were not taken into consideration by the judge who ruled the policy unconstitutional.

This case highlights a number of crucial moral issues.  One, of course, has to do with religious liberty.  Many argue that such liberty consists in more than simply the ability to follow the dictates of your own conscience privately.  It also means that the material conditions that allow you to practice that religion are not, themselves, systematically prevented from being satisfied.   The freedom to exercise your religion is being satisfied in only a surface-level way when people are allowed freedom to believe whatever they want, but are prohibited, even if only in a practical sense, from congregating with others who hold similar beliefs.

Second, this case highlights a moral tension pertaining to judicial review of legislation.  On the one hand, the democratic process is perhaps best served by little intervention on the part of courts. According to this view, the proper role for judges to play is to interpret the law based on the wording of the law itself.  If the actual letter of the law is not unconstitutional, the law, constructed by democratically elected representatives, stands.

On the other hand, many think that laws should be interpreted in such a way that their intended impact is taken into consideration.  In this case, many argue that zoning laws have been passed in at attempt to prevent a Mosque from being built in a community that doesn’t want it there.  Other laws, though constitutional on their face, have similarly negative potential effects.  For example, a common criticism of voter fraud and identification laws is that such laws are designed to prevent minority groups from voting.  Others are concerned that laws zoning voting districts into certain configurations are ultimately intended do nothing more than ensure that the legislators who constructed the zoning laws get to keep their seats.  Those who make these contentions argue that the judicial branch needs to look not only at the wording of the law, but at the intent behind its construction.

There is some strong evidence that at least some members of this New Jersey Township harbor negative attitudes toward Muslims.  We can only hope that the more visible presence of Muslims within the community will foster attitudes of empathy and understanding.