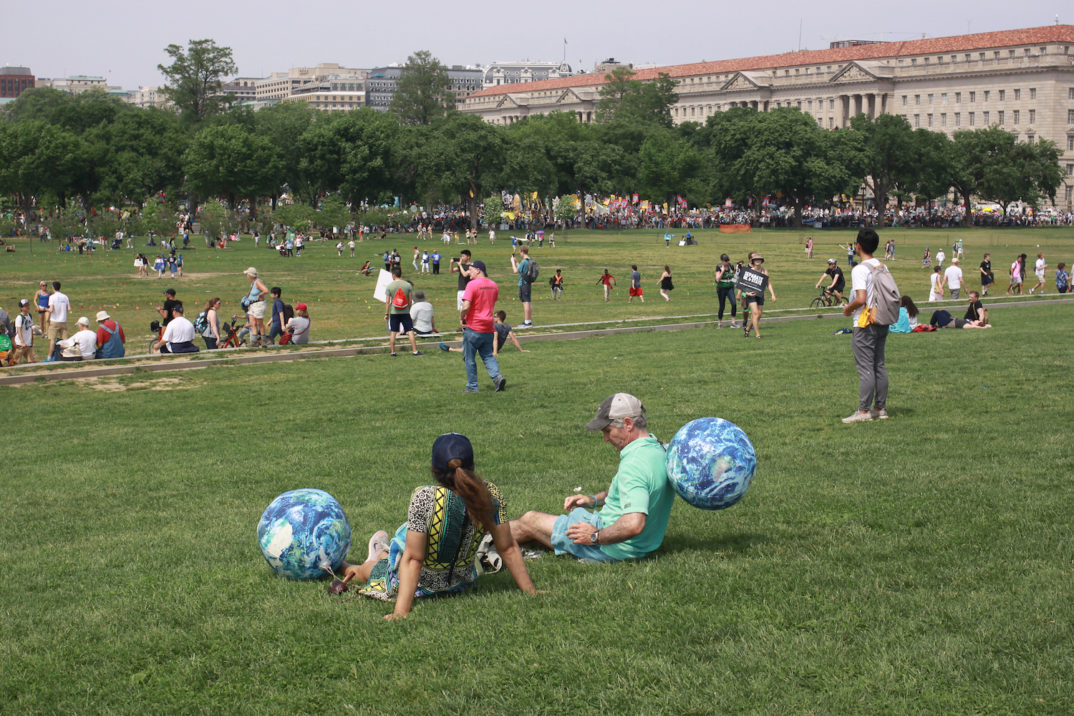 March participants on the National Mall. All photos by Conner Gordon.

On a day that ironically, or appropriately, broke temperature records, over 200,000 people flocked to the nation’s capital to participate in The People’s Climate March. The march date coincided with President Trump’s 100th day in office, often considered a landmark in every presidency. However, President Trump was not present to observe the massive demonstration, but instead held rallies in support of his presidency in Harrisburg, Pennsylvania. Regardless of Trump, the People’s Climate March aimed to send a bigger message about the importance of environmental protection and climate action. However, like any large protest, the motivations and perspectives of individuals participating differed.

Around 9 am, the National Mall was already buzzing with protesters and street vendors. It seemed as though everywhere you looked, there was someone trying to sell something. Much of the merchandise was Trump-themed, with hats and buttons branding the slogan “Dump Trump.” Some vendors were even selling pink pussy hats, which were hugely popular during the Women’s March. It was hard not to imagine that vendors simply recycled their products from previous anti-Trump demonstrations, aiming to target a specific type of protestor. I was disappointed to see a lack of environmentally themed merchandise, but I still managed to find People’s Climate March shirts and buttons.

Around 11:00, many began to line up in the procession, though the march wasn’t scheduled to begin until 12:30.  The march procession was divided into eight sections, with protesters allowed to decide which section best fit their motivation for marching. These groups included indigenous activists, scientists, religious leaders, and children and students.  We ultimately decided to march in the “Guardians of the Future” group which included youth, parents and students. However, we were at the back of this section, so we also intermingled with the “Defenders of Truth” section, which was made up of scientists and educators.

While waiting for the march itself to begin, I took the opportunity to speak with a few people about their motivation for taking part in the march. Ben Culbertson, a ceramics teacher from central Pennsylvania said that he and his wife were motivated to come largely because of their concern about climate change. “We’re firm believers in science, and the fact that climate change is real and that we have to do something now rather than later,” Culbertson said.

Ben and his wife’s motivation for marching echoed the March for Science, which took place only a week earlier. Interestingly enough, Ben and his wife were not scientists, but Ben remarked that he had “come from a family of scientists.” Ben teaches ceramics at Shippensburg University, and stated that he tries to incorporate environmental issues into his curriculum.

On the other hand, some protesters had a more Trump-centered motivation for marching. One woman who I spoke to, who asked to remain anonymous, said that she was very frightened with the direction in which the country was headed. Her main motivation for marching was because of her dissatisfaction with Trump and his administration. She had previously attended the Women’s March on Washington, and affirmed that her experience marching in January inspired her to partake in The People’s Climate March. As a retired attorney, she also expressed how her experience in law and politics made her passionate about demonstration.

Both Ben and the woman I spoke to, as well as many other protesters, were a part of the baby-boomer generation. There were other student groups, but most people in the march were over college-aged. Donna Riner, a first-year at DePauw University, said that it was important for her to march because “It’s Trump’s 100th day in office and I was kind of mindful when he was elected so being here with all these people who are enraged is really powerful and important.” Trump’s presidency motivated the older generations and the younger alike to take part in the Climate March.

The Trump-centered tone of the march became even more obvious when the march passed by the Trump International Hotel. Marchers chanted “Shame,” and pointed their fingers accusatorily at the hotel. At one point, a man staying in a room on one of the upper floors came and sat by the window. Protesters shouted and pointed at him defiantly, as if to assert he was accountable in some way. Passing by the front of the hotel, I could make out a huddled mass of people looking out the front windows near the entrance. It was at this point that the march felt more like a political demonstration than an environmental one.

At times, the message wasn’t completely focused. At one point, the march passed by a group of counter-protesters, who had signs that read “Pro-Environment means Pro-Life” and a large megaphone. While marching past, several protesters became agitated with the pro-life protestors and started chanting “My body my choice, her body her choice” in order to drown out the counter-protestors with the megaphone. Not all protesters were pleased with this reaction, though. One person yelled out “This is a climate march,” to which another protester responded “It’s intersectional.” This interaction raises interesting questions about the purpose and goal of the climate march as well as what messages are appropriate. Undeniably, there must have been some protesters that identify as pro-life and probably felt uncomfortable with marchers shouting pro-choice chants. However, others might argue that intersectionality is extremely important, because it encourages members of many different groups to feel welcome and take part in a cause that might otherwise not seem relevant.

In a previous article, I mentioned the ethical concerns raised with associating climate change and environmental degradation and Donald Trump and his administration alone. It seems as though many marchers shared the sentiment of the People’s Climate March campaign in the need to target Trump specifically. It doesn’t seem as though this tactic necessarily drew out more people than a regular environmental march would, considering the fact that the first People’s Climate March saw over twice as many people.

Overall, The People’s Climate March surpassed its estimated 100,000 in attendance generated an abundance of news coverage. Some might argue that Trump’s absence from D.C. that weekend was due to the pressure the march put on him and his administration. Though Trump never acknowledged the march, many politicians expressed their support, and some even partook in marching, such as Senator Bernie Sanders, who attended a sister march in Vermont. Whether or not the People’s Climate March made a large impact is not yet apparent, but will have to be inferred going forward based on the actions of those with the power to act.