The Fire Beneath Our Feet 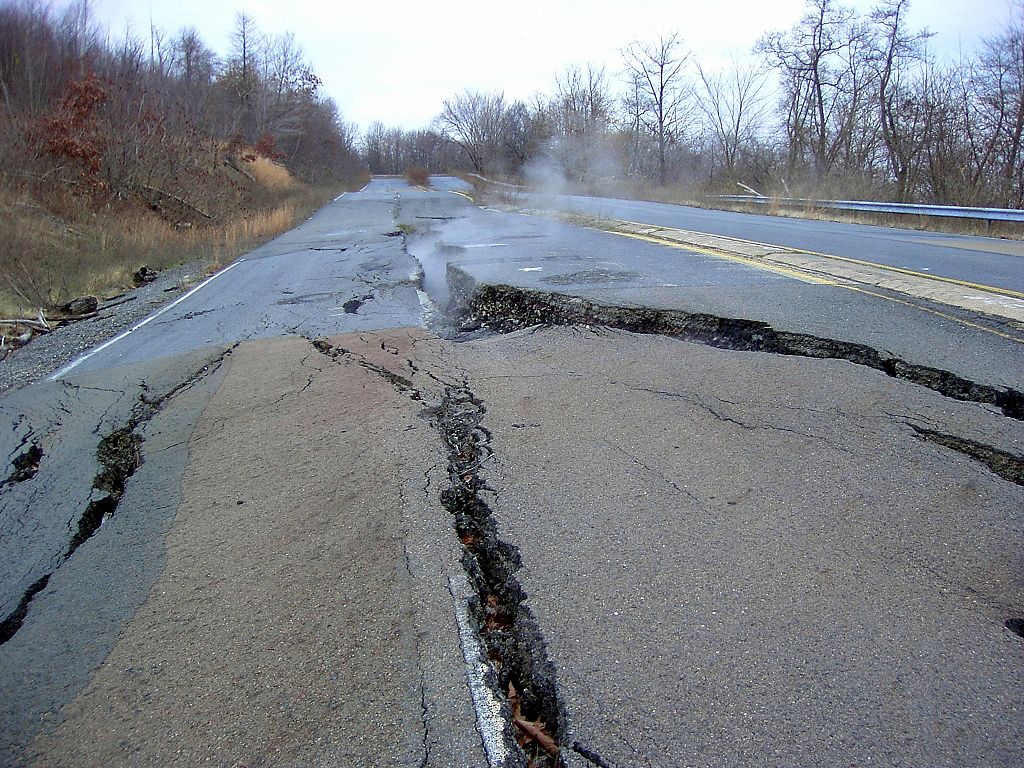 “Route 61 Crack in Centralia, Pennsylvania” by JohnDS is licensed under CC0 Public Domain (via Wikimedia Commons)

Centralia, Pennsylvania has been burning since 1962. Or rather, the ground beneath the town is burning: an underground coal seam fire that caused the town to be mostly abandoned has been burning for over 50 years, and will continue for at least another 250. The fire likely began when a trash fire ignited the coal seam in the network of old mines beneath the town. Gradually, a slow apocalypse took place: snow couldn’t always stick to the heated ground, vegetables could grow year-round, the main highway sunk eight feet, and residents began to pass out from carbon monoxide gas issuing from their basements. By 1991, the town was almost entirely government-owned under eminent domain, and in 2002 the ZIP code was revoked. The few residents that remain do so at their own risk.

However, Centralia’s fire is not unique, though the attention it has garnered might be. Thousands of coal fires are burning across the globe — many in China and India, as well as across the United States. The oldest known coal seam fire is Australia’s Burning Mountain, which has likely been in flames for 6,000 years. Discover summarizes coal fires’ prevalence, calling them “as ancient and as widely distributed as coal itself.” Nevertheless, coal seam fires have increased in frequency since the Industrial Revolution and the rise in mining.

As well as contributing significantly to global warming through the emissions of greenhouse gases, these fires produce sulfur that can crystalize to taint water and remain gaseous to poison the air. Also, carbon dioxide is diffused not only through vents but through the soil itself, as discovered on the site of the Powder River fire in Wyoming. Because the coal is burning with less oxygen, more noxious gasses are released than would be in a comparable hot-burning factory fire. Another study suggests heavy amounts of mercury also issue from coal seam fires — “nearly a quarter as much as all the nation’s coal-fired power plants.”

Until recently, the effects of coal fires on the environment have gone mostly unexplored. In 2009, the US Geological Survey released a fact sheet that began to detail some of the hazards of coal fires. Beyond the greenhouse gasses and dangerous toxins, minerals that condense during the fire can further pollute water. Coal fires, while technically a naturally-occurring hazard, are easily “initiated and aggravated by human influence,” providing plenty of evidence as to why they have increased since the Industrial Revolution. Because of lax mining regulations and oversight, coal fires are more easily started by machinery or flames. They are also much harder to put out, since mines provide an automatic venting system for the fire. And as coal fire expert Anupma Prakash points out, “the magnitude of the problem” has largely been ignored. Centralia is a picture of this negligence: efforts to put out the fire were underfunded and came too late.

In India, some of the most egregious coal fires occur in the Jharia Coalfield, with a reported 65 fires burning simultaneously in 2007. The first fires started in 1916, but many residents are too poor to move away from the dangerous conditions, and instead stay behind to mine coal illegally. In China, 10 to 20 million pounds of coal is lost because of coal fires according to Prakash, and even more by Discover’s estimate, claiming up to 10 percent of China’s total coal production. Since much of the mining occurs in less-populated northern parts of the country and the coal is widely available, the government has often ignored the disastrous environmental consequences of coal fires.

Coal fires across the world have largely faced indifference from local governments. The lack of firefighting in the US alone, from Pennsylvania, Wyoming, Colorado, and Kentucky, contributes carbon emissions and other dangerous chemicals to the air and water. In India and China as well as Borneo, Australia, and anywhere coal is mined, coal fires threaten livelihoods, homes, and the very earth on which we stand.