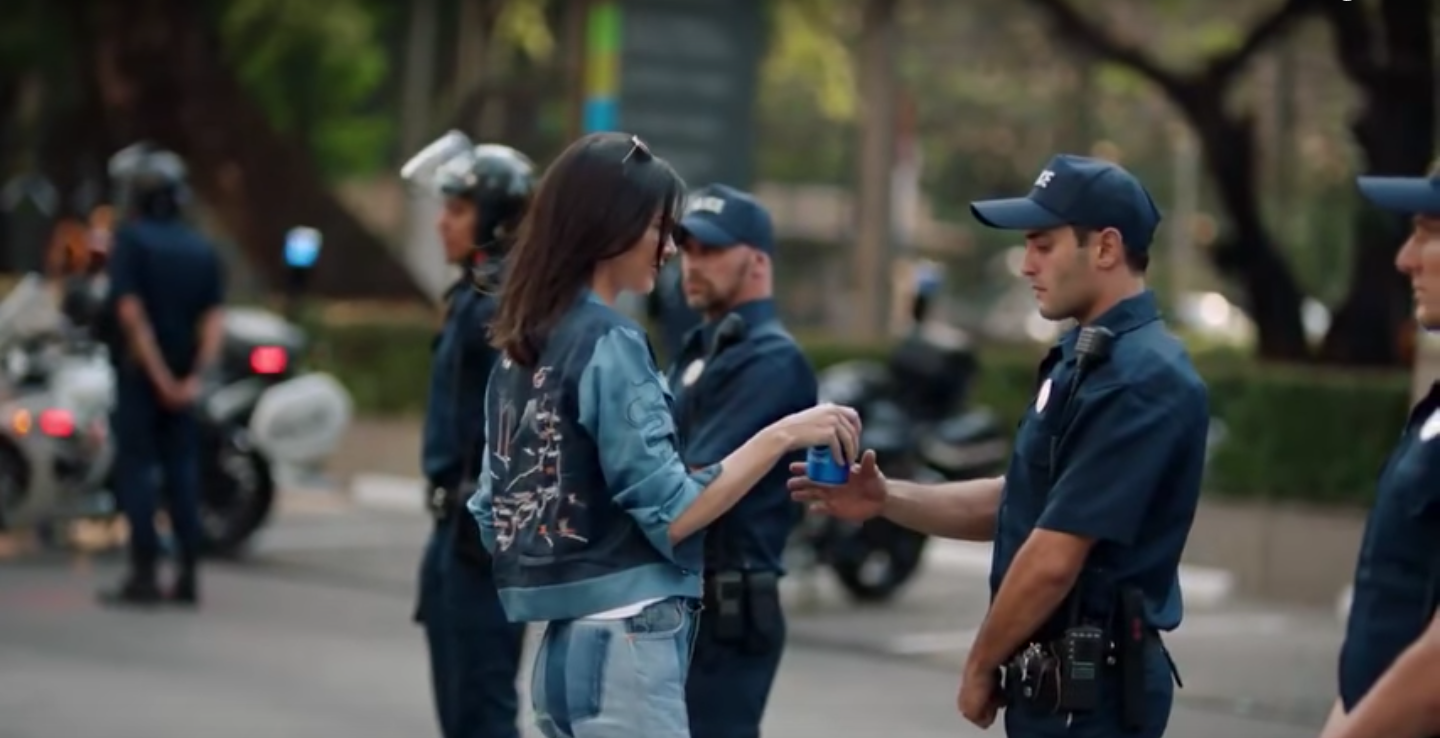 Screen Capture from “Kendall Jenner for PEPSI Commercial” (via Youtube)

On April 4, Pepsi recalled an ad less than 24 hours after its release on account of ridicule for its insensitivity towards social justice movements. In the ad, Kendall Jenner is in a photoshoot when she notices a protest occurring outside. Prompted by a head nod from one of the protesters, she joins the crowd and eventually hands the police officers on duty a Pepsi; outbursts of applause and cheering come from the crowd when the officer accepts the Pepsi.

Many consumers viewed the ad as a mockery of Black Lives Matter, because the imagery of Kendall Jenner’s approach towards the police officers closely resembles that of Iesha Evans, a woman who peacefully protested the shooting of Alton Sterling in Baton Rouge. People broadly accused Pepsi of trivializing protesting for important social justice issues. Whether or not it was trivialized can be debated—Pepsi initially cited that it was an important ad “reflect[ing] people from different walks of life coming together in a spirit of harmony,” but went on to admit that they “missed the mark.” There is something to be said, however, for Pepsi’s original goal. To some extent, the commercial appears to conclude with the police officers accepting a proverbial olive branch from the protesters, which would be a step forward for their social cause.

There is no question that social issues were exploited for this ad, but why is it that only Pepsi’s ad received backlash? There has been a slew of firms which have incorporated social issues into their marketing strategies throughout the past couple years. Is it ever acceptable to use a social issue to sell a product? If so, where can the line be drawn?

For the 2017 Super Bowl, Audi released a commercial featuring a young girl in a drag race, competing solely against young males. Throughout the girl’s race, her father narrates with just-shy-of-ridiculous questions. He begins by asking “what will I tell my daughter?” and continues by asking things like, “Do I tell her that her dad is worth more than her mom?” and “Do I tell her that despite her education, her skills, her drive, her intelligence, she will automatically be valued as less than every man she ever meets?” The audience cheers as she wins, and he concludes by saying “Or maybe, I’ll be able to tell her something different” and walks towards his Audi. Audi displays a message telling audiences that they are “committed to equal pay for equal work,” and ends the ad with the logo of the father’s car front and center as it drives away down the country road.

Audi is clearly using equal pay for women in order to sell their cars. They convey a message essentially saying that, since they support equal work and pay, the audience should choose to buy their cars; the ad did not show anything about Audi’s corporate environment, however, or give any real examples of their equal treatment and payment of women. They also seem to send an underlying message insinuating that their competitors do not treat women equally, which may or may not be true. Here, there is an exploitation of an important social issue but no backlash for it.

Airbnb aired a commercial during the 2017 Superbowl, as well. Theirs featured an ever-shifting collage of diverse faces with delicate, alluring piano music playing in the background. A message flashed across the 53-second ad saying essentially that Airbnb believes people of all backgrounds, religions, and sexual orientations belong, and that “the world is more beautiful the more you accept.” At no point in the ad is there a mention of what Airbnb is, or what service they sell; it is simply promoting their firm’s stance on inclusivity and using that to entice people into using their service.

The ad served to repair their reputation as an inclusive company after recent host discrimination cases. Only viewers familiar with the scandal, though, would realize the ad’s intentions. Accepting people is not directly relevant to renting out apartments, so unfamiliar viewers would view this ad similarly to the Audi ad–an unrelated to their core business trying to promote themselves as “the good guy.” The difference between a company using a social issue to promote its product and promoting its product by supporting social issues irrelevant to their product is a tricky one to navigate. Does this difference make ads like Audi’s and Airbnb’s more permissible than Pepsi’s ad?

On a different note, it has become popular for hip-hop and rap to incorporate social justice issues into their lyrics and music videos. In a similar manner to television or radio advertising, mainstream music videos and songs are produced to sell; the difference is that the mode of advertising and the product are wrapped into one. It is often difficult to discern and perhaps impossible, if not crass, to judge whether the artists write about issues because they have been subject to that issue or simply because they are passionate towards it. Smith Michaels wrote in RESPECT magazine in January 2016 that “[rappers] have also done a lot to make people aware of the difficulties facing poor urban blacks.” Michaels goes on to posit, though, that “strategic brand management” forces its artists to hold off on commenting on the social issues “until the dust completely clears,” giving the impression that there is indeed a calculated, profit-seeking business to the social issues.

One could argue, even, that rappers and singers are in fact mini-corporations; one of their goals is to sell a product for a profit. Kendrick Lamar recently released a music video for “Humble” in which he is pictured doing various activities such as standing in a dark room dressed as a bishop, sitting at a table strongly resembling The Last Supper, and praising a woman for her “natural” look. Billboard writer Brad Wete sums up the video and lyrics by essentially saying Lamar’s new song is intended to point out that the current generation has forgotten about humility and authenticity. Many have debated on whether he is helping or hurting female beauty standards. Those who believe he has hurt them say that he continues to reinforce and accept the idea that males set female beauty standards. Those who believe he is doing good say Lamar exposes the beauty of naturality and authenticity.

Kanye West has been rapping about his experiences of racism since he dropped his first album, The College Dropout, in 2004. He has continued to rap about his experiences with racism all the way through his 2016 album The Life of Pablo. West’s lyrics have explicitly and implicitly discussed issues of racism, but back in November of 2016, on his tour for The Life of Pablo, he told people, “specifically…black people, [to] stop focusing on racism.” This directly contradicts his discussion and publicization of racism in much of the music he produces. Why would he rap about and sell songs about something he believes should not be talked about?

Chance the Rapper somewhat recently published Coloring Book, an album that portrays the intersection of religion and being black, as well as how Christianity comes across in a secular space. The home page of his Coloring Book website features a call to “Support Chicago Public Schools,” a cause that would seem to coincide with his Christian identity and Christianity’s call to serve less fortunate, and his donation of one million dollars to Chicago Public Schools. Its position right under the image promoting his spring 2017 tour, however, reinforces the idea that profit is still first in most artists’ and managers’ minds.

The question must be asked to what extent authenticity in intent is valued when considering the intersection of social issues and the sale of products. To what extent are ads supposed to be a piece of art, and how far should artistry go? It is no question that music is art, but it becomes confusing when that art has a large profit focus. There is a definite artistic component to ad-making, as the goal is to attract viewers to their product. It is important to consider whether the same can be said about music, and whether is there a clear way to distinguish when artists authentically support the messages of their music and when they are using the message solely to gain profit. Ultimately, addressing the question of whether it is wrong in the production of music to create with at least some degree of intent on profit is vital.

This all raises the important question of the purpose of ads and the space that separates them from music videos and lyrics. If musicians can write about and show social issues and profit from it, why can’t companies? Since music is considered art but also is a widely consumed pop-culture product (unlike, say, paintings or drawings), it is put in a confusing space as well. When does profit from important issues cross the line to exploitation?