Respecting the Dead: The Case of Charles Byrne, the Irish Giant 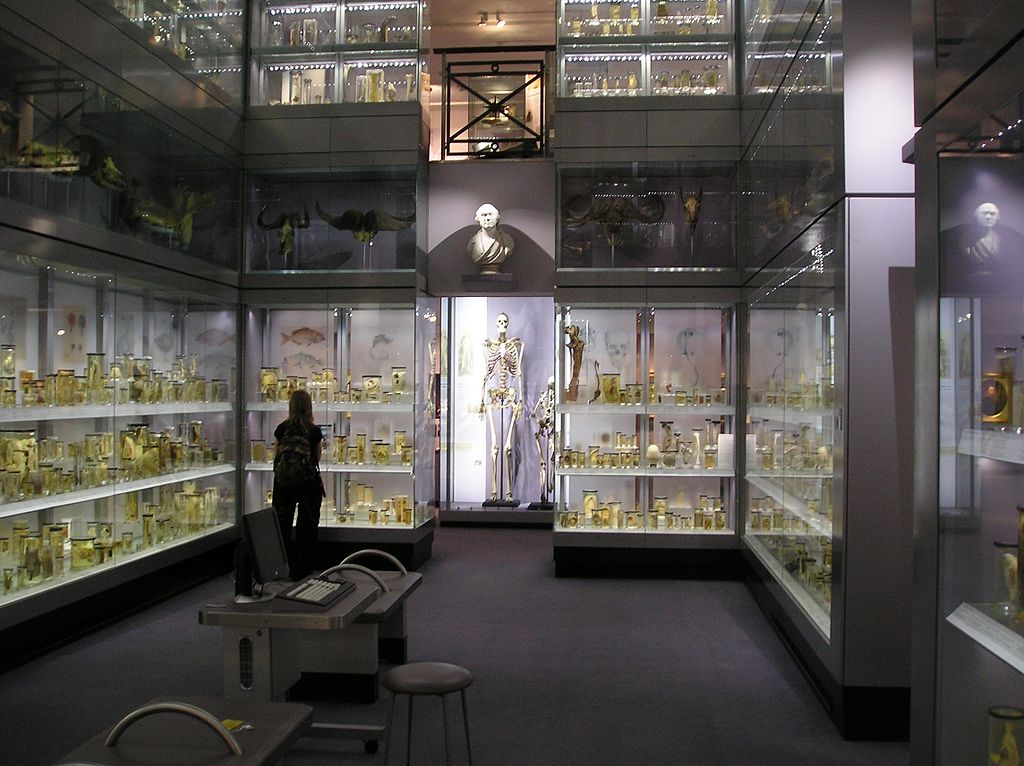 “Hunterian Collection” by StoneColdCrazy is licensed under CC BY-SA 3.0 (via Wikimedia Commons)

Charles Byrne died quite young, at the age of 22, and quite tall, at approximately seven feet, eight inches. This is still tall for today, but must have been more impressive during Mr. Byrne’s short life in the late 18th century. According to an Ohio State University researcher, the average height for men in Northern Europe in the 17th and 18th centuries was only about five feet, five inches. Today, the average height for men in Northern Ireland has been calculated to be about five feet, 10 inches.

It was revealed in 1909 by the surgeon Harvey Cushing, who removed the top part of Mr. Byrne’s skull, that Mr. Byrne had a pituitary tumor that likely caused both his enormous stature and numerous health problems. Much later, testing on DNA extracted from Mr. Byrne’s teeth revealed that he had a rare genetic mutation of the AIP gene, which was likely to have caused the pituitary tumor and subsequent gigantism.

What is ethically curious about Charles Byrne’s life is how we know so much about his health and genetic condition. Why is an American surgeon in 1909 cutting open the skull of a Northern Irish man who has been dead for over 100 years? Why, 100 years after that, are British and German researchers conducting tests on DNA extracted from his teeth? Mr. Byrne, who grew up in a poor family, used his condition to make a living, and traveled to London to show off his extraordinary height to paying audiences. This fame drew the attention of “the Resurrectionists,” men who robbed graves to supply the corpses for scientists to dissect and for medical schools to train surgeons. Surgery, it should be noted, was a far less successful profession at that time. The British Association of Urological Surgeons reports, for example, that one of the best known surgeons who performed bladder stone removal surgery in the 18th century had a 50 percent mortality rate. This was considered outstandingly successful.

According to Thomas Muinzer of the University of Stirling, Mr. Byrne feared his corpse would be taken by the Resurrectionists and requested that he be buried in a lead coffin sunk to the bottom of the sea. His wish was not honored, and his fears were realized. None other than John Hunter, a famous 18th century surgeon who has been called the “Founder of Modern Scientific Surgery,” ended up with Mr. Byrne’s corpse after it was snatched from his coffin before Mr. Byrne’s funeral even took place. You can still see Mr. Byrne’s skeleton displayed at the museum named for John Hunter at the Royal College of Surgeons of England.

One the one hand, it seems obvious that we should respect the wishes of the dead. Muinzer asks rhetorically, “Do we want to live in a world where people die, they’re gone, who cares about what they wanted in life in terms of the remains or in terms of their burial? Or do we want to live in a world where we respect people’s wishes after they’ve passed away?” Muinzer supposes that most people would rather have their wishes respected after their death, and I imagine he is right. On the other hand, most of us seem perfectly okay with showcasing corpses from long ago that were probably not acquired by means of informed consent. Why don’t we care, for example, about the wishes of the mummified Egyptians?

Perhaps, the moral duties we owe to one another presuppose that our failure to carry out those duties would harm the person to whom we owed them. When we think of a recently deceased friend or relative, it is easy for us to recall that person as they lived, and we imagine that once living person as being harmed if their wishes are not respected. The Egyptians have been dead for thousands of years; so, we are more apt to respond, “Who cares? Certainly not the Ancient Egyptians!” However, a corpse is a corpse and does not cares what happens to it, whether it has been a corpse for thousands of years or for only a few days.

One may object, it is not the presently existing corpse that it is harmed, but the once-living person who has died. Perhaps we should care about what the Egyptians wanted to have happened to their bodies after death, just as we care about the wishes of the person did who exist before their death. But if you consider this position a little bit more, it can seem counter-intuitive. We think it harmful to not respect the legitimate wishes of living persons, and we generally have obligations to respect people’s legitimate wishes. If a person’s wishes are not respected, they are somehow made worse off. But a dead person is a person who no longer exists. A person who no longer exists cannot be harmed, because there is no sense to the claim that they are somehow worse off. If we are meant to suppose that my present decision to not respect a dead person’s wish retroactively makes that person worse off when they were alive in the past, then we are meant to suppose the existence of backwards causation. That seems unbelievable.

George Pitcher urges us to drop the assumption that a harm must make a person worse off for it to count as a genuine harm. Imagine a man who is constantly and unfairly ridiculed behind his back by his “friends” and acquaintances but never hears a word of it. He goes to his grave believing that people respected him. These false friends have certainly wronged the man, and seemingly harmed him, even though he never knew about it. If Pitcher is right, then maybe the harm done against the dead such as Charles Byrne is like the harm done against this man. No spooky backward causation is presumed, just regular, old-fashioned betrayal.