What Happened at Ramjas : A Voiceless India 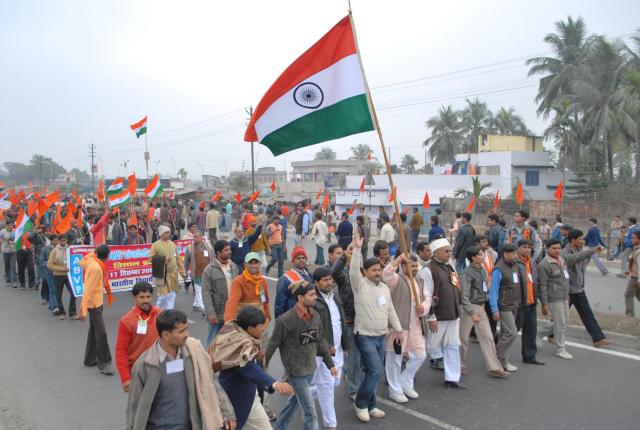 On February 22nd of this year, India’s democratic foundations were shaken once again. The promise of individual rights to its people was broken as its academic community was silenced.

On that evening, violence broke out on the campus of Delhi University’s Ramjas College after a seminar called “Cultures of Protest: A Seminar Exploring Representations of Dissent” was forcefully shut down by the Akhil Bharatiya Vidyarthi Parishad (ABVP). The ABVP is the student wing of the Hindu nationalist party, the Bharatiya Janata Party (BJP). Students members of the ABVP opposed the seminar because of the inclusion of PhD students Umar Khalid and Shehla Rashid from Delhi’s politically active Jawaharlal Nehru University (JNU). Khalid and Rashid were presenting research that stood to question and criticize the actions of the indian government. The ABVP saw them as advancers of dangerous “anti-national” and “anti-India” sentiments.

In response to the shutdown, students and professors of Ramjas College – primarily composed of members of the left wing student organization, All India Students Association (AISA), peacefully protested against the ABVP. However, they were met with stone pelts, bottles, and beatings by the ABVP. Their banners were torn, students and professors were manhandled and threatened, and female protesters were given rape threats. All while, the police force did little to stop the aggressors. They either joined in the chaos, clearly siding with the ABVP, or stood back and let the goons wreck their havoc.

Incidences like this are not new to India. They have been happening since the very founding of the nation in 1947, though more since the rise of the BJP in national politics. What happened at Ramjas, with the help of social media fervor, has sparked an important national debate about the condition of India’s universities. Institutions of higher education have long been a battleground for national political parties – a threat that stands to demean academic freedom and free speech within the country.

Before we go any further, it may help to touch upon the how India’s public universities have become extremely politicized zones. This occurs in most public universities like Ramjas College and JNU due to student political organizations that are directly backed by national parties. In an interview with The Prindle Post, Naomi Hazarika, a master’s student at JNU, said that “incidents like Ramjas happen almost everyday at places like JNU in varying degrees. Since JNU is a left-oriented university, it stands in direct opposition to the right wing government in power. A lot of times students are branded ‘Naxalites’ and ‘Maoists’ for simply speaking up against the regime.”

The student organization whose party is is the ruling government has a lot of influence over the university’s administration, local police, and even government officials. Often these organizations contain non-student members who are no more than thugs and goondas. Today, the Bharatiya Janata Party (BJP), the parent organization of the ABVP, has been exercising their rule for the last three years under Narendra Modi’s government. Hazarika went on to say, “Every regime has its own way of reacting to dissent. But when it comes to curbing university spaces, this regime has definitely crossed certain boundaries.”

Having gained some context on the animal that is Indian university politics, we can now explore some of the pressing moral concerns the chaos at Ramjas College dredged up: mainly the violation of the right to free speech and individual liberty.

The ABVP and BJP’s justification for silencing Ramjas’ students is that the freedom of speech need not apply to “anti-nationals” who seek to speak against the nation of India. These sentiments were defended, and even encouraged, by powerful factions of the government. Union Home Minister of State and BJP affiliate, Kiren Rijiju tweeted, “No anti-India slogans will be allowed in the name of freedom of speech. Freedom of expression in the country does not give anyone the right to make college campuses hub of anti-national activity.” The particularities of such nationalist sentiments will be discussed in the 2nd article of this series.

These statements restricting free speech are founded in India’s ambiguous legality surrounding the issue. This is the legal foundation upon which the BJP justifies events like that of February 22nd: Section 153A and 295A of the Indian Penal Code says, “disharmony or feelings of enmity, hatred or ill-will between different religious, racial, language or regional groups or castes or community that is likely to disturb the public tranquillity.” Though the interpretation of this section is contested, the BJP has interpreted it as muddling free speech in India, capitalizing on it to use rhetoric about anti-nationals.

The US has a “clear and present danger” test established by the Supreme Court in Schenck v US which determines that only speech that poses imminent threat is harmful. Similarly in India only “words and actions that directly issue a call to violence qualify as sedition.” This was clarified by the Statement of Support signed by hundreds of respected international academics to Ramjas’ protesting students. The statement went on to read, “The peaceful demonstration and gathering of citizens does not constitute criminal conduct. The police’s actions on the JNU [and Ramjas] campuses is illegal under the constitution of India.”

In further support for upholding India’s principles of free speech, Justice RM Lodha said in 2014 that, “we cannot curtail fundamental rights of people. Free speech is a precious right guaranteed by Constitution.” Further explaining to the public why free discourse is an absolute necessity, Justice Lodha added, “We are a mature democracy and it is for the public to decide what the truth is. We are 1280 million people and there are thus 1280 million views. One is free to not accept the view of others. It is a matter of perception, and a sentiment objectionable to a person might be normal to another person.”

This free market of ideas that is so core to the Indian democracy comes to fruition in India’s universities. As educational institutions, these are places where crucial discussion, criticism, and research takes place about the state of the country, and the world. This process of discussion and change forever moves society towards betterment. If we limit academic freedom according to the whims of the political party in charge, the youth of the country that are finding their own voices and who will form policy for the next generation continue to be be silenced. As the Statement of Support to the Ramjas students declared, “An open, tolerant, and democratic society is inextricably linked to critical thought and expression cultivated by universities in India and abroad.”

While some ascribe more noble goals of keeping accord within Indian society to the ABVP and the BJP, most deem their intents malicious. The Student Union of Tata Institute of Social Sciences (TISS), just one of the many universities that have come out in support of the Ramjas students, said, “ABVP’s motive was to suppress any discussion on issues of the marginalized, preserving the Brahmanical, patriarchal space in universities.” The TISS students went on to declare their stance in solidarity with their comrades at Ramjas College in the face of the “ABVP’s repeated attempts across the country to suppress democratic spaces and voices.”

Such reactions to the incident at Ramjas by students and the populus in general is warranted, given its repetitive nature. The country has seen such infractions on speech, liberty, and even life, time and again at the hands of the dominant political party. There is a context in which Ramjas happened, and it may be worth mentioning.

Irfan Habib, the beloved Indian historian, noted that “whenever any person raises the issue of the democratic rights of people of Kashmir [like did many of the students scheduled to speak at the Ramjas seminar], the government tries to browbeat them by accusing them of being anti-national…Instead, those who use violence to crush the weakest sections of society are the real anti-nationals.” He noted that what happened at Ramjas was not an isolated incident but part of a “systematic move to crush India’s tradition of peaceful protests,” which began nearly two centuries ago against the British rule with Mahatma Gandhi. There have been countless other moves on the part of the ABVP – supported by the BJP – to suppress academic freedom. A quick look at the most recent events that all took place in 2016 will indicate this: Umar Khalid’s intimidatory arrest on unfounded charges of sedition, the suicide of University of Hyderabad student Rohit Vemula due to ABVP terrorizing and conspiracy, and the abduction and torture of Delhi University professor Dr. GN Saibaba. Upon learning of this history of oppression and intimidation, one gains a saddening insight into the real consequences of what happens when a country fails to protect the most basic rights of its own citizens.

To further discuss the topic, we will take a deeper look into what created an environment in India in which free speech could be challenged so frivolously. The answer may lie in India’s historic and political struggle to find a balance between nationalism and liberalism – an aspect of the issue we will explore more in the series’ second article, “What Happened at Ramjas: Tyranny of the Nation.”

Hazarika from JNU ended our interview on a pensive note, stating, “While I haven’t given up on our civil society and the power of our people, I am absolutely sure of the fact that dark times are ahead of us and that this is just the beginning.”