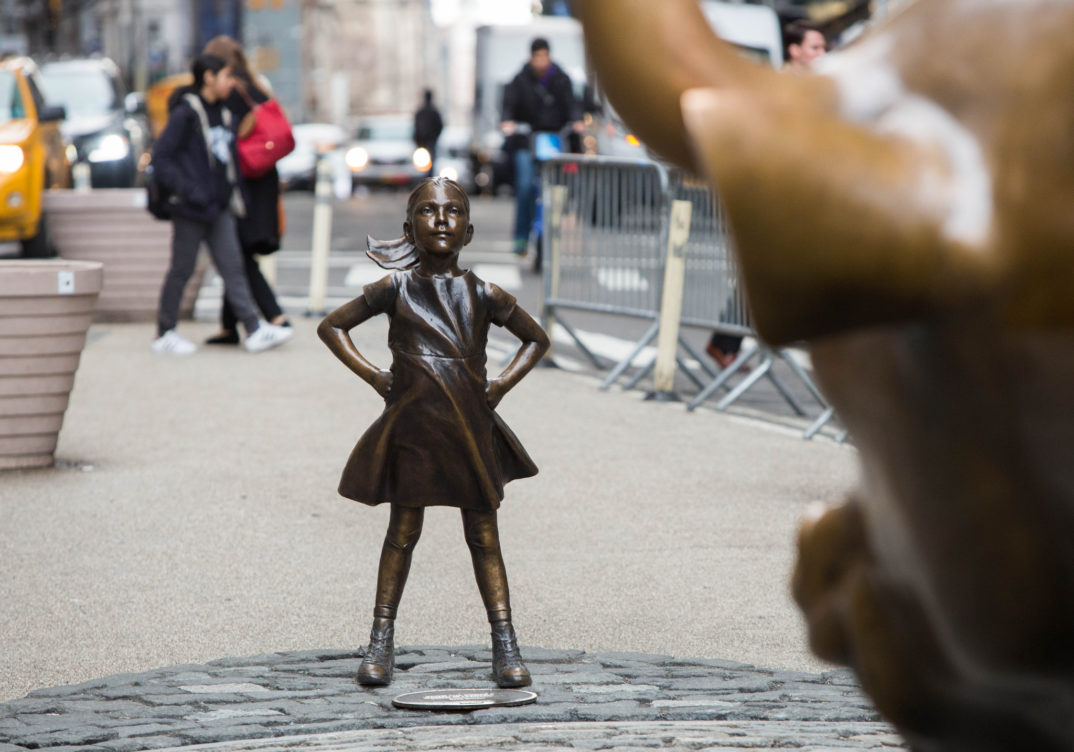 Walking through New York City’s financial district, tourists and Wall Street professionals alike are sure to notice the standoff between and 11-foot-tall charging bull and the 4-foot-tall little girl, staring at him, unmoved by his size and power. As the conflict between the two statues heats up, Americans must decide who to defend.

The Charging Bull was erected after the 1987 stock market crash as a symbol of economic prosperity on Wall Street. According to Arturo Di Modica, the artist behind Charging Bull, he installed the bull in the middle of the night outside of the New York Stock Exchange as a form of guerrilla art. He says the piece was removed, but after public outcry it found a permanent home in Bowling Green Park, where it has remained ever since. The Charging Bull has been a popular tourist attraction since its installation, and has garnered even more press lately as a result of his new neighbor.

This year, a Boston financial firm, State Street Global Advisors, installed Fearless Girl to “promote greater gender diversity.” However, since she is placed across from the bull, the little girl could also be interpreted as standing up to a male-dominated Wall Street. It is the second, more literal meaning that Di Modica finds problematic. The boldness of the Fearless Girl seems to hinge on her proximity to the Charging Bull. Di Modica and his attorney believe her placement transforms his statue from a symbol of optimism “into a negative force and a threat.”

Though the Fearless Girl is a hot tourist destination and a revered feminist symbol, does that allow her to infringe on the rights of another artist? Some would argue that public art is meant to evolve over time with changes to geographical surroundings. Additionally, it may be difficult to find sympathy with Di Modica’s guerrilla (i.e., illegal) art, as opposed to a clearly commissioned piece.

There is no doubt that Fearless Girl has been one of the most celebrated pieces of public art in New York City, but she has at least one enemy in the Charging Bull that she faces. Di Modica has taken issue with the little girl standing across from his work. Though he has no problem with the piece itself, Di Modica argues that Fearless Girl detracts from the Charging Bull’s message and changes the context of his statue.

Fearless Girl was only commissioned to remain in her spot for a few days, but her stay has already been extended, and many would like to see her find a permanent home in Bowling Green. Di Modica hopes to prevent this and is willing to sue if needed. According to the New York Times, New York City Mayor Bill de Blasio is a big fan and said, “Men who don’t like women taking up space are exactly why we need the Fearless Girl.” Though de Blasio was not speaking directly to Di Modica, it seems clear that he appreciates the interplay between the two sculptures.