The Ethics of an Atheist Pope 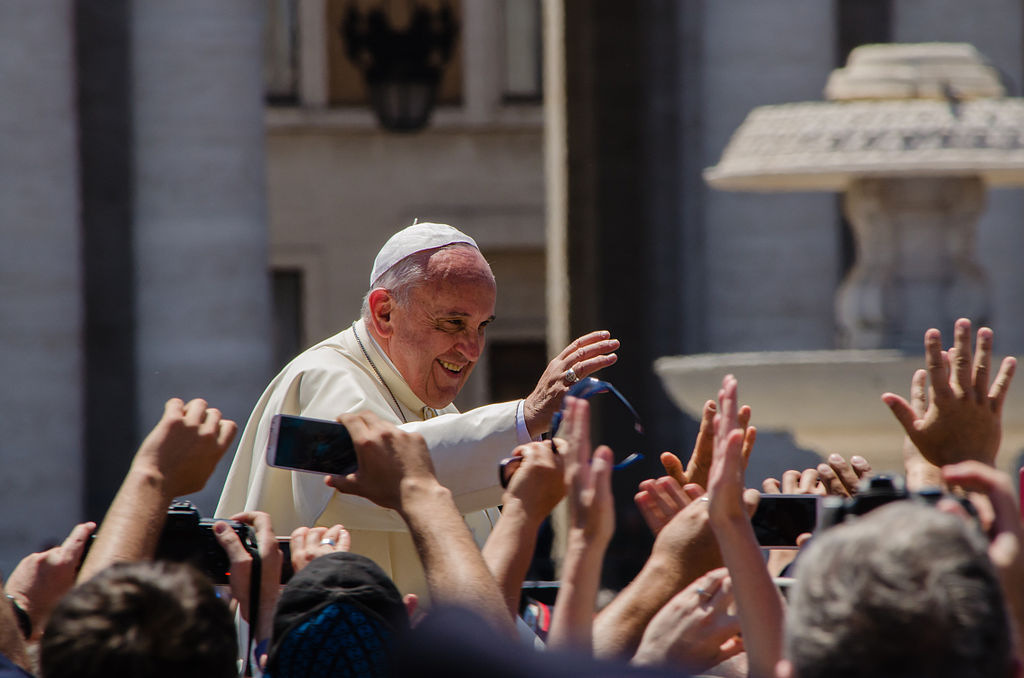 “Pope Francis” by Alfredo Borba is licensed under CC BY-SA 4.0 (via Wikimedia Commons)

With two deeply conservative predecessors (John Paul II and Benedict XVI), Pope Francis has raised a lot of eyebrows over the years. He has not made any significant reform (unlike, say, John XXIII), but his populist style has definitely struck a chord of sympathy amongst many Catholics. John Paul II was a populist as well, but he was closer to the original version of populism, gathering huge crowds all over the world. Francis, on the other hand, is not so apt at crowd gathering, but he is apt at appearing to be in touch with common folks. He has repeatedly washed people’s feet (in remembrance of Jesus’ humbleness), and he is very warm to journalists and visitors. Unlike Benedict XVI, he does not seem to be too interested in pompous rituals or luxurious protocols. We may never know whether these gestures are genuine, or a calculated political image; they are most likely something in between.

But, Francis does not raise eyebrows just with his humbleness. Every now and then, he makes some remarks that irritate the most traditionalist sectors in the Church. For instance, he disapproved being excessively judgmental of transsexuals, gays and divorced people. He exhorted priests to forgive those who have had abortions. Unlike John Paul II (a populist, but also a Pope that had a fierce stand against communism), Francis has made sympathetic remarks towards communism, alleging that this ideology is in essence similar to Christianity. He is also prone to favor other progressive causes, such as environmentalism.

Commentators and analysts refuse to label him as a Pope either of the left or of the right. But, the truth is that, at least in the modern age, there had never been a Pope as liberal as this one. In Europe and the Americas, leftists and progressives tend to be nonreligious. Apparently, it would be absurd for a Pope, no matter how liberal he may be, to be nonreligious. Yet, every once in a while, Pope Francis raises some people’s eyebrows by making some comments that, if not outright atheistic, at least seem to have a sympathetic approach to atheism.

For example, Francis has told audiences that it is better to be an atheist than a hypocritical Catholic. And, he has assured atheists that they don’t have to believe in God to go to heaven. Apparently, he recently confessed that he too has questioned the existence of God. Truth be told, some of these comments are manipulated in headlines. Journalists seem too eager to sensationalize the Pope’s opinions, when in fact, they are not as radical as they seem at first.

On the other hand, it has not been unheard of that some very pious Catholic saints have had feelings of emptiness when it comes to God’s existence. Saint John of the Cross called these moments of doubt the Dark Night of the Soul. Apparently, Saint John of the Cross overcame his doubts, but a more recent saint, Teresa of Calcutta, felt there was no God, and we cannot be sure if she changed her mind before dying.

We have no record of any Pope being an atheist; Francis only acknowledged having had feelings of emptiness in the past. Allegedly, Leo X (a very flawed and corrupt Pope) said “What profit has not that fable of Christ brought us,” but the phrase is surely apocryphal. Yet, the possibility of an atheist Pope calls for an ethical discussion: if a Pope stops believing in the existence of God, what must he do? He obviously would not be able to proclaim he is an atheist, and still continue to be Pope. Must he resign, or must he keep his atheism to himself?

Philosopher Miguel de Unamuno approached this ethical dilemma in his novel Saint Manuel Bueno Martyr. It tells the story of a village Catholic priest who stops believing in the existence of God. Yet, the priest refuses to tell his congregation about his atheism, because he realizes that the villagers would be extremely upset, and that might disrupt their communal lifestyle.

Unamuno had some intellectual connections to philosophical pragmatism, and in the novel, he inclines towards the idea that it is better not to disrupt common folk with some uncomfortable truth. God may not exist, but the idea that God does exist, is useful, and that is enough justification for the priest to continue to proclaim it, even if he does not personally believe it. This is far removed from a Kantian imperative to always tell the truth, no matter the cost. It’s safe to say most common people do not favor Kant’s rigor.

Pope Francis, it seems, has taken important steps towards some much-needed reforms in the Vatican. Apart from his humbleness populism and his frequent liberal remarks, he has done some more serious stuff: he has committed to prosecuting pedophile priests (although he was recently criticized for reducing some sanctions), and he has vowed to put some order in the Vatican Bank (a notoriously corrupt institution). If he were an atheist and came out of the closet, these endeavors would not be fulfilled. The history of the Papacy is filled with deeply immoral Popes. Comparatively, an atheist Pope who did not disclose his real beliefs, but who nevertheless did a lot of good, would surely be judged favorably by Catholics, ethicists and historians.