A Shooting in Seattle: Hate Crimes under Trump 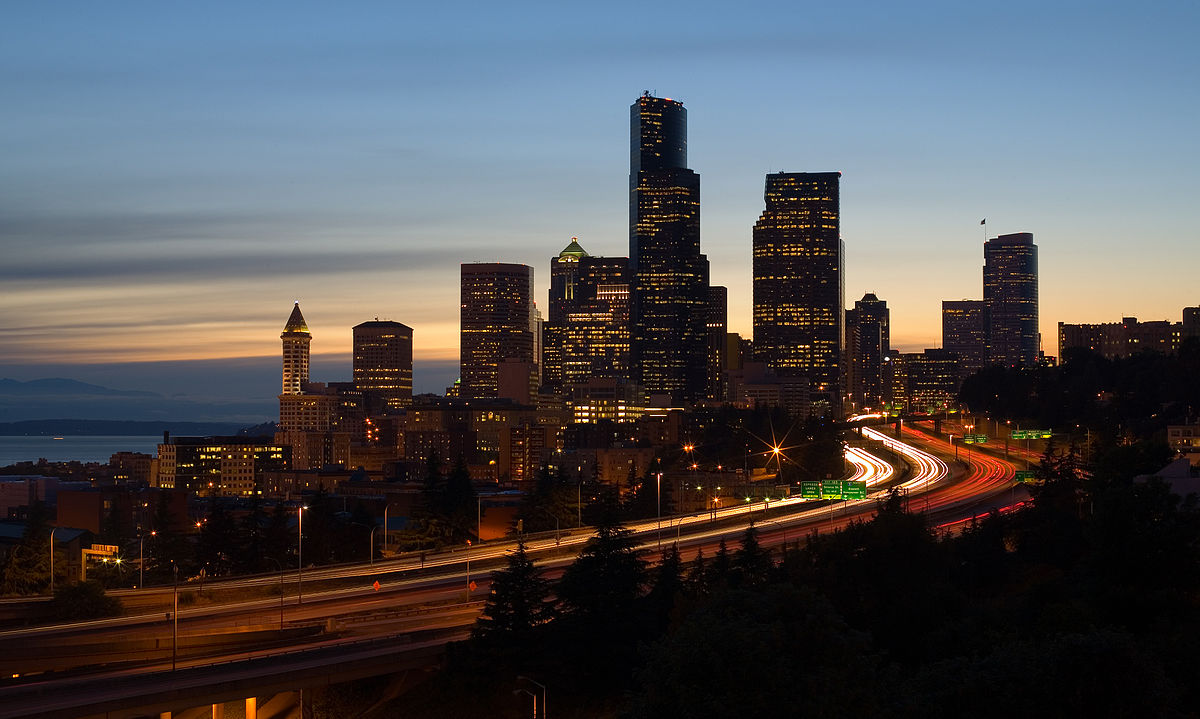 “Interstate 5 in Washington” by I, Cacophony is licensed under CC BY-SA 3.0 (via Wikipedia)

During his campaign, one of Donald Trump’s clearest messages targeted immigration. He proposed that the United States build a wall on the border with Mexico, that it crack down on people living in the country illegally, and that it amp up restrictions on individuals who try to immigrate to the US with some sort of “extreme vetting.” The rhetoric surrounding his goals of keeping America safe implied the danger to America lurks in the shape of Mexicans and immigrants from Muslim nations. America is less safe, according to Trump’s rhetoric, because of the sort of person who is getting in the country. The narrative around citizenship and immigration is one of treacherous dangers and only letting what may be considered the “right sort” of people in. This has a distorting effect on our view of the ethics of immigration, and on the people that make up the demographics that are being so characterized.

On February 21, the Trump administration issued a plan to crack down on individuals in this country illegally. Whereas the emphasis of the Obama administration was to deport undocumented Americans who had committed serious or violent crimes, the current Department of Homeland Security is broadening their focus with the aim of deporting more people. Department of Homeland Security Secretary John Kelly said that the plan “implements new policies designed to stem illegal immigration and facilitate the detection, apprehension, detention and removal of aliens who have no lawful basis to enter or remain in the United States.” Major sanctuary cities, such as San Francisco, New York, and Los Angeles, where law enforcement have policies of not pursuing undocumented citizens, are threatened with having their federal funding stripped unless they change such policies.

On Monday, March 7, Trump signed an executive order banning citizens from six predominantly Muslim countries from entering the country. This was a move to amend an executive order he signed on January 27. The previous order included seven countries (Iraq has been excluded from the current ban) and language that led to two state attorneys quickly suing and getting some of the order’s effects stayed. The messaging of the order is telling, purportedly targeting countries that have close ties with terrorism. However, the list of countries does not include the nations of origin of the perpetrators of the significant acts of terror since 9/11, and a recent leak from the Department of Homeland Security suggests that “citizenship is likely an unreliable indicator” of terrorist activities.” The focus on the Muslim-majority countries and previous proposals by Trump has led to the order’s nickname – the Muslim Ban.

A report from non-partisan researchers at California State University, San Bernardino suggests that political rhetoric has real impact on hate crimes. They note in particular the difference between the messages of President Bush after 9/11 and candidate Trump after the mass shooting in San Bernardino. While President Bush emphasized the distinction between the religion of Islam and terrorist acts, Trump called for an actual ban on Muslims entering the country. there was a marked difference in hate crimes following the two events. Even if we do not consider there to be a direct causal link between the remarks made by Donald Trump – such as “Islam hates us” – and the rise in anti-Muslim crimes, the correlations are striking.

Friday’s shooting does not stand as an isolated event. The rise in harassment and hate crimes has not even been restricted to outpourings of islamophobia, however.

Anti-latinx crimes rose 69 percent in Los Angeles in the wake of Trump’s rise to the presidency. Hate crimes have been rising in New York as well. Jewish community centers and schools have received bomb threats in 11 states. This follows the February 27 vandalization of a Jewish cemetery outside Philadelphia, and another vandalization in a Missouri cemetery earlier this month.

Trump’s actions and messages aren’t at work in a vacuum. He didn’t insert the belief systems and capacity to commit these crimes into these people. However, as the California State University report suggests, the position of those in power has an influence on what is perceived to be acceptable, and what becomes in fact the common perspective. If those in power suggest that the problems in a country can be solved by restricting Muslims and latinxs, this paints Muslims and latinxs with quite a negative brush.

A further problem with characterizing the danger to America in terms of immigration is that it suggests that those travelling into the US are fundamentally different than those that are already here.

Along with personal identity, the country to which one belongs brings goods and responsibilities. To belong to a country involves owing taxes that support its policies, but also involves protection under the law and the rights to resources and benefits. Practically, policies regarding how open a nation’s borders should be are grounded in the nation’s right to self-determination, and are sensitive to how citizenship shapes a life well-lived. The questions of what immigration policy a country should adopt, and what path towards citizenship is appropriate for that country are important questions of justice.

Contemporary debates surrounding the ethics of immigration carve out a range of defensible positions (see, for instance, Debating the Ethics of Immigration: Is there a Right to Exclude? by Wellman and Cole). On one extreme, there is the thought that nations have the right to exclude any and all people seeking to cross their borders, so long as they are legitimate states. Views like these are grounded in the value of self-determination for each nation. On the other hand, there is the position that closed borders are impermissible on the grounds that we should respect the right of mobility for all people. To allow for mobility would be an expression of the liberal value of universalism (not preferencing some over others), and would accept the need for mobility as a response to global inequality.

However, in Trump’s rhetoric, there seems to be an implicit assumption that in addressing these questions we are considering allowing people to enter our country that are fundamentally different from the citizens and residents already here. If, in order to keep America safe, we need to restrict Muslims and people from Latin America, it seems that America either doesn’t include these groups, or these groups are dangerous – America needs protecting from them. This has corresponded with an increase in violence against these populations that live here already. There are 3.3 million Muslims in America, and 10 million Americans of Middle Eastern descent. 17% of the population of the US are of Latin American descent.

The conceptual underpinning of Trump’s immigration policy extends past the questions of national self-determination that shape issues of citizenship. It characterizes groups of people – Americans and non-Americans alike – as dangerous, and leads to greater instability for populations in the US now.