On Providing Safe Spaces for Drug Use 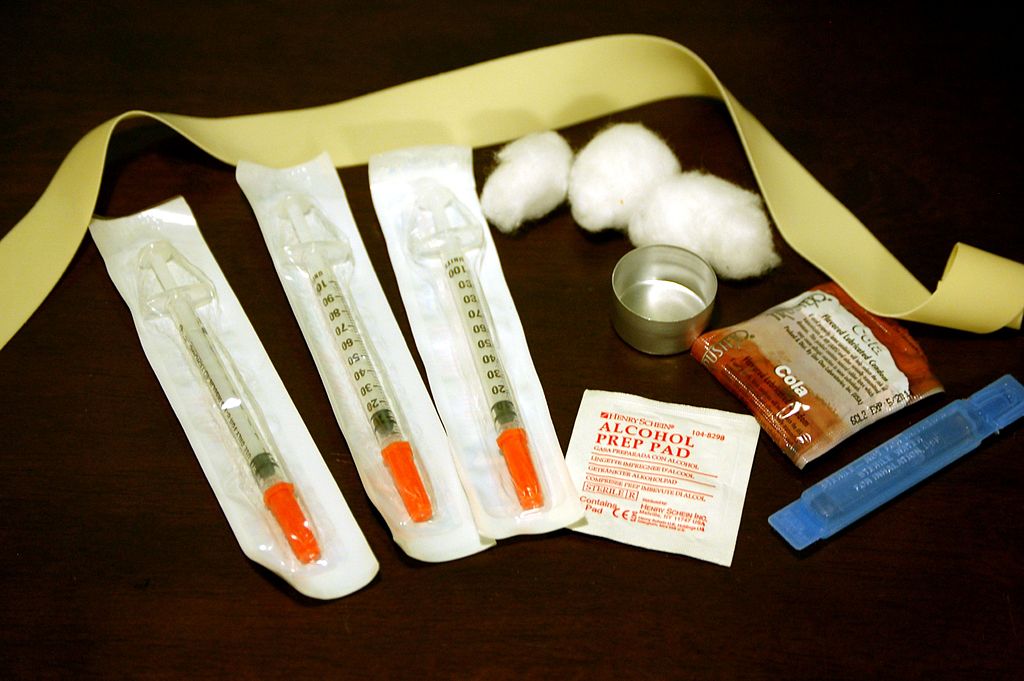 “The contents of a needle exchange kit” by Todd Huffman is licensed under CC BY 2.0 (via Wikimedia Commons)

Those that disagree with the initiatives that would provide safe, supervised spaces for using narcotic worry about the principle that such policies embody (that providing such spaces tacitly condone illegal drug use), or are concerned that they will in fact get in the way of recovery. These concerns have been raised about other policy moves that attempt to alleviate the dangers of IV drug use: needle exchange programs, where intravenous drug users can obtain safe and disease-free needles in exchange for their used ones instead of sharing, and thereby increasing, the risks involved in their drug use; and the general release of naloxone, an anti-opioid drug that treats the effects of overdose and is available to non-medical professionals. Providing a safety net for using dangerous drugs reduces the concerns that the drug user may have over using the drug and seeking higher highs.

Drug overdoses cause more deaths annually in the US than gun fatalities or car crashes. In the face of this reality, approaches to drug policy are heavily scrutinized. One way to frame to issue is in terms of the goal of intervention. If our goal is to live in a drug-free society, then no policy compromises that start with accepting the reality of substance abuse and the disease of addiction will be acceptable. If the goal is to reduce the harm of substance abuse and the health risks that come along with it, then policy cannot be made assuming that people will not use narcotics, or will stop given a rational set of options. However, this latter approach will take for granted that addicts will be using drugs, and people find this troubling.

We engage in these different kinds of goal-setting in everyday life: deciding either to engage with the aim of someone’s action or to engage with the means and potential consequences of the aim they are adopting. For example, when we have a friend who we know will make a less-than-healthy decision, we try to reduce the harm that will result from his decision. We advise him to take different means to his end, and provide ways to mitigate the damage to his life and others. We may take up two tiers of policy, independent of each other: one to engage him about the end he has adopted that we consider to be unhealthy, and another to try to handle the damage given how all but certain we are that he will be choosing the end.

If our friend is a cigarette smoker, we advise him to smoke filtered cigarettes, perhaps. We would try to have him avoid smoking around children. Or we attempt to craft a plan to have him smoke fewer cigarettes a day, or take up hobbies that are good for his circulatory system and lungs in order to perhaps offset the harm he is doing to himself. Our attempts to mitigate the harm of deciding to smoke does not necessarily qualify as condoning the friend’s decision.

Government policies do exist that provide nudges towards healthy, productive, or positive behavior. There are financial incentives for buying energy efficient cars, or making environmentally friendly updates to your house. Also, though it is personally convenient not to worry about how many plastic bags you use at the grocery store, in California we now have a tax at the grocery store for using the environment-destroying things, in order to try to dissuade people from using and discarding so many.

So, it may seem that a more appropriate role for the government would be to be one the “side” of dissuading this unhealthy behavior, as it does with these other behaviors. Decades of policy suggest this may not be the most effective route to reducing the harms of addiction, however, and empirical and conceptual models suggest why. When it comes to addiction, the behaviors involved make up a distinct pathology. The behaviors that we would like to stop aren’t the typical imprudent choices that are bad for our society or the individuals in the long term, like producing environmental waste.

Philosophers have attempted to account for the distinctive character of addiction. Models of motivation have historically had a somewhat caricatured picture of addiction, painting the addict as overcome by an irresistible desire (making it difficult to understand the possibility of recovery), or experiencing extreme weakness of will (making it difficult to understand addiction as distinctive). What is key to characterizing addiction, however, is that the disorder engages the individual’s deliberative process – when someone experiences an addictive desire (when they desire something in an addictive manner, or out of an addiction), it doesn’t get weighed against other values and commitments in the way that other desires do.

So while of course it makes sense to put recovery projects in place and support the rehabilitation of addicts, it is counterproductive not also to pursue the tier of policy making that recognizes at a societal level that there will always be drug addicts who decide to use drugs, and try to mitigate the effects of these decisions if there are safe ways to do so.

In the case of safe spaces, there are prudential reasons to pursue the policies as well: in some cases, they have proved to be a helpful resource of information about overdoses and the practices of drug addicts. In Boston’s space for illegal narcotics use, medical professionals have been making interesting and useful discoveries about the ways narcotics users overdose. Users have overdosed in surprising ways, presenting with consistent but atypical symptoms that suggest different treatment from the standard protocol.

This month, Seattle, WA finalized legislation to open two safe injection facilities, and Dan Morhaim, a state legislator from Maryland introduced a bill that would legalize safe consumption programs. As Morhaim, a board-certified physician with years working in emergency care, puts his goals: “Let me be real clear, I’m not for substance abuse. It’s a bad thing. I’ve seen the ravages, but we’ve been doing this for 50 years, and tried all these things. And after 50 years, there’s not one data point that is better.”

With the kind of harms involved in drug overdoses and addiction, more legislators are more interested in focusing on dealing with the harms of the behavior in new ways. If these spaces keep more people alive, that seems like a step in the right direction.