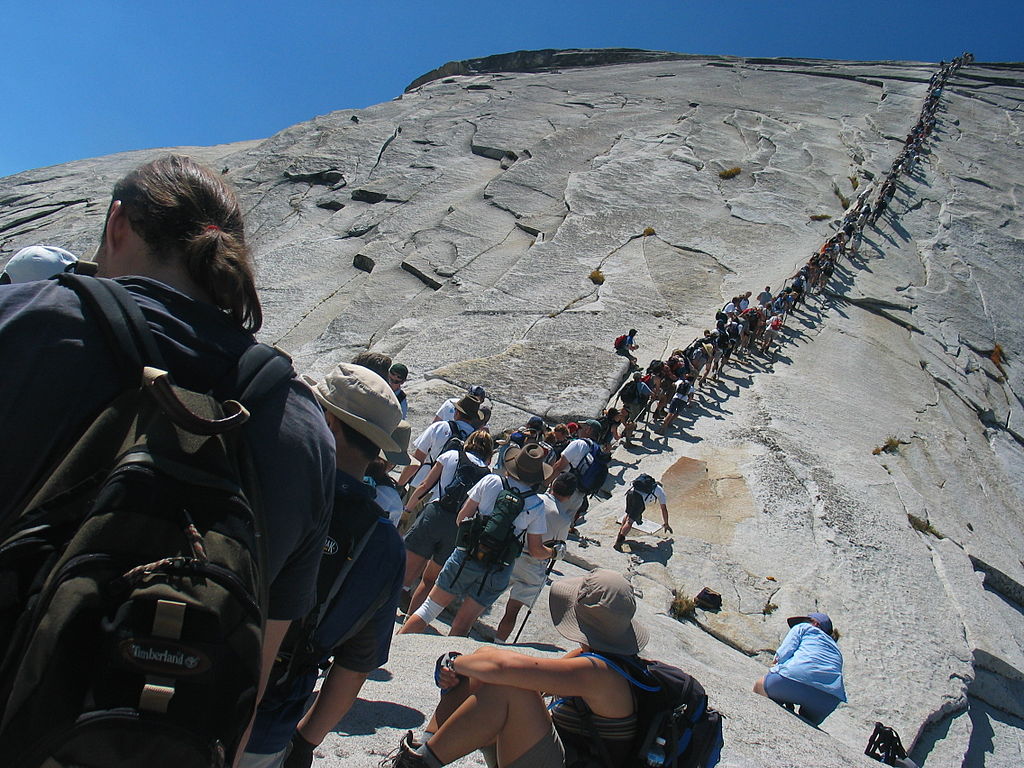 “Half Dome Ropes” by Daniel Schwen is licensed under CC BY-SA 4.0 (via Wikimedia Commons)

This past year marked the 100-year anniversary of the National Park Service (NPS). Created in 1916, the NPS has had a long standing tradition of stewardship that has preserved many of America’s most beautiful areas from the threats of manifest destiny and American exceptionalism. However, the NPS must now deal with a new threat presented through overcrowding and the environmentally degrading practices that come with it. Taken to the extreme through the example of Zion National Park, where rising crowds resulted in six million people visiting the six-mile-long stretch of canyon last year, can result in major infrastructure changes to mitigate the anthropogenic effects.

Because of rising crowds, many avid visitors have rearranged when they visit the park, usually resorting to visiting in the winter when the crowds thin out. Although celebrating our rich, natural history is important in the conversation of environmentalism, sustainability and conservatism, doing so at the risk of environmental degradation and rising carbon footprints due to travel creates an intriguing moral dilemma.

Over the past year, many parks were pushed to create reservation systems for reserving camping sites and entrance into their parks due to the overflowing amount of visitors that exceeded most parks’ limitations. When parks exceed these limitations, the result is increased levels of unsustainable practices and increased traffic on trails. These factors paired together can create enormous maintenance costs for the NPS, which has a projected $12 million in required maintenance fees to mitigate issues already present. Around 15 years ago, when Zion was experiencing rising numbers of visitors and also their worst cases of air pollution due to all the cars running through the park, they decided to invest in their infrastructure. This led to the creation of a mandatory shuttle system, which usually operates during the busiest seasons. Further so, maintenance needs that require immense attention, such as upgrading sewage lines and electrical systems, have created hazardous situations for many parks.

In addition, increasing crowds of visitors has resulted in more human-wildlife conflicts as humans begin to occupy and push other inhabitants out. As crowds grow larger and animal populations become stressed, this will further lead to larger, possibly aggressive contact between humans and wildlife. While there might be physical imbalances caused by increased traffic by humans, the psychological effects that causes changes in mating and eating patterns along with other issues to form is just as detrimental. One study indicated that caribou populations in areas being developed for roads or logging by humans became more susceptible to predation due to recent human disturbances in the areas they resided in.

Another example could include animals that use sonar to communicate with each other may be diminished by the presence of vehicles that create loud noises and disrupt their ability to effectively carry out their mating patterns. A constant cycle of this could drive down the population of these animals in areas where these kind of vehicles frequently drive by. While the physical presence of crowds may have enough effects in and of itself, the lack of awareness among wildlife presents another issue. Because portions of the public are not aware of the possible species of plants and animals that they may encounter at parks in different regions of the country, the propensity for rare and endangered wildlife to be threatened is overwhelming.

Many ideas have been proposed to mitigate traffic and providing effective reparations to maintain facilities and the area. A leading thought centers around creating higher costs for entrance into parks. This would cause fewer people to enter national parks, as fewer people would be able to expend that money. Unfortunately, this would not necessarily solve the issue, and there are a few arguments against this. For one, many people see this as a form of double taxation. Many people believe that, since they pay an income tax, then they should not be required to pay to enter a national park. Although, many people do not recognize that only about an eighth of a percent of their total income tax actually go towards the National Park Service, which is not enough to sustain the costs to protect these areas.

In addition, imposing higher costs does not necessarily counter any environmental repercussions caused by increased traffic. To ensure that our parks outlast our own lifetimes, we must consider the best possible practices of stewardship and preservation in order to mitigate responses caused through misinformed traffic through national parks. Whether this is levying heftier fines or imposing restrictions on access to parks with the reservation system, all possible avenues need to be explored.