Marching on the Metro: The Inauguration and the Women’s March 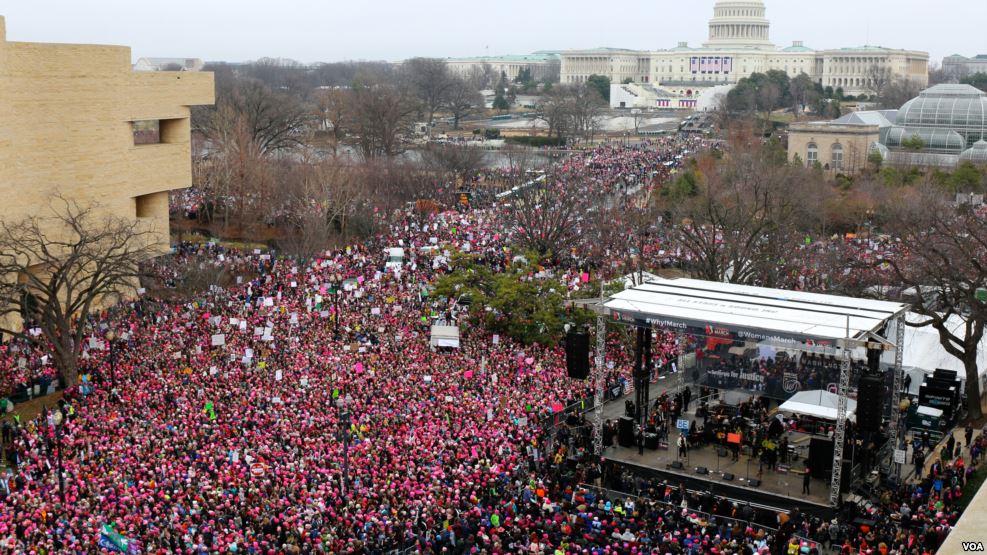 During rush hour, getting into the District is a hassle itself. Usually, to get to Capitol Hill from Alexandria, Virginia (a suburb of the District on the metro line) takes only around half an hour to forty minutes, but in a train packed full of people. It’s best to factor in almost an hour to get to work, just in case you get unlucky and your train holds at a station for several minutes or a train in front of yours derails – not an infrequent occurrence.

So when I decided to head into the District for the inauguration of Donald Trump – out of morbid curiosity and my friend’s persistent persuading to at least take a walk around with her – I factored in about an hour to travel a trip that usually takes 30 minutes. I had figured that the train would be packed in the same way in was for both of Barack Obama’s inaugurations.

My metro car was nearly empty.

After two summers spent in D.C., two Fourth of Julys, plus the other times I’ve been to D.C. to visit friends or the year I spent living in the D.C. suburbs as a young teenager, I had never seen a metro car so empty more than an hour before a large event. In the handful of stops I took into the District, no more than eight people were ever in my metro car. Two of them were Trump supporters in the signature red hats; three were protestors; the remainder appeared to be locals trying to either get to work or go shopping.

Once I got into the District, Foggy Bottom – the part of the district in which George Washington University and the State Department reside, a fifteen minute walk from the White House – was crawling with National Guardsmen and humvees. A handful of street vendors hawked Trump wares outside the station, but the military vastly outnumbered the number of people walking down the street. Surprised at the lack of people, my friend and I decided to see how far we could get to the Capitol before the National Guard or the crowd prevented us from walking further. Between the Lincoln Memorial and the Washington Monument, we saw five people – three of whom were locals out for a jog with their dog, who quickly turned and went the other way at the first sign of a crowd.

The crowd of people did not emerge until we hit the Washington Monument area. Instead of a large crowd of Trump supporters, we found an equivalent number of protestors to supporters, and a decent amount of curious-looking young adults who seemed, like us, to not be supporters of this inauguration – merely in town and wondering what the atmosphere was like. Not wanting to watch the inauguration itself, we rerouted ourselves toward Pennsylvania Avenue to look along the parade route. While we weren’t there soon to the parade’s start time, as Trump was still giving his address as we walked through a security checkpoint staffed by Secret Service, the crowd was sparse. The bleachers were almost completely empty, save the space reserved for disabled viewers. Getting right up to the barrier was easy.

We left in the middle of his speech, after a group of young and middle-aged white men started screaming offensive remarks about Muslims when Trump addressed ISIS in his speech.

The next morning, anticipating more people than before, I decided to head to the Women’s March around nine in the morning. I anticipated to be on the back end of the crowd of people, but given my experience on Friday, I believed it would be the equivalent of a normal rush hour. I couldn’t have been more wrong.

The metro train was packed like sardines, to the point where the train had to travel more slowly than others. An excess of customers caused huge backlogs on the platforms, where my train passed several stations without being able to onboard additional passengers. The atmosphere of the train was one of camaraderie and openness, with women and men from all over the country talking to each other about their backgrounds, views and hopes.

Exiting a metro station during rush hour is usually one of the most frustrating and slow parts of the commute – getting caught in a slow line on the escalator isn’t uncommon. While this process often feels like it takes ages, it really only take around five minutes. However, after disembarking at L’Enfant Plaza, I was stuck on the platform for twenty minutes and had to wait over an hour in line to exit the station itself.

Once above the ground, the National Guard was out and directing the flow of people. There was such a huge crowd of people that it was difficult to recognize where you were and orient yourself; even the military personnel and police stationed to assist were having trouble giving directions. Getting separated from people was easy. The flow of people was so intense that it was nearly impossible to try to move in the opposite direction. Chanting had already started and the marchers had yet to arrive to the area of the rally.

In total, to get to the march and meet up with my group, it took over over two hours – a trip that normally would have taken under an hour.

The organizers of the march determined at some point in the early afternoon that the march was too big to march to the White House as previously planned. Having been cut off from the organizers as the crowd got too big to handle and communicate to, the marchers decided to create their own routes. Some headed for the Trump Hotel at Federal Triangle; another group headed for the Ellipse, a park nearby the White House; others headed toward the Capitol or across downtown. In the process, the march ended up shutting down most of downtown D.C. While the inauguration shut down significant parts of D.C. due to street closures, it did not shut down area of the capital from sheer number of people. The tax on the metro system was much less significant – getting out of the District took two hours on Saturday. It took thirty minutes on Friday.

The reality of what was happening on the ground is in direct conflict with the Trump administration’s claim that the crowd at his inauguration was the largest to ever witness an inauguration, based on incorrect data on the number of metro trips taken. Additionally, photographic evidence shows a larger crowd in attendance at Obama’s 2009 inauguration than Trump’s. The Women’s March on Washington, according to some crowd scientists, may have more three times the size of the inauguration crowd. Based on personal experience, I would have to agree that it was blatantly apparent that Saturday’s March had far more people in attendance than Friday’s inauguration. As more protests are being planned – such as a Scientists’ March on Washington – crowd size and the refusal to acknowledge disparities between supporters and dissenters is likely to be a continual topic of discussion while the Trump administration is in the White House.