Economics and Sustainability in the Overfishing of Bluefin Tuna 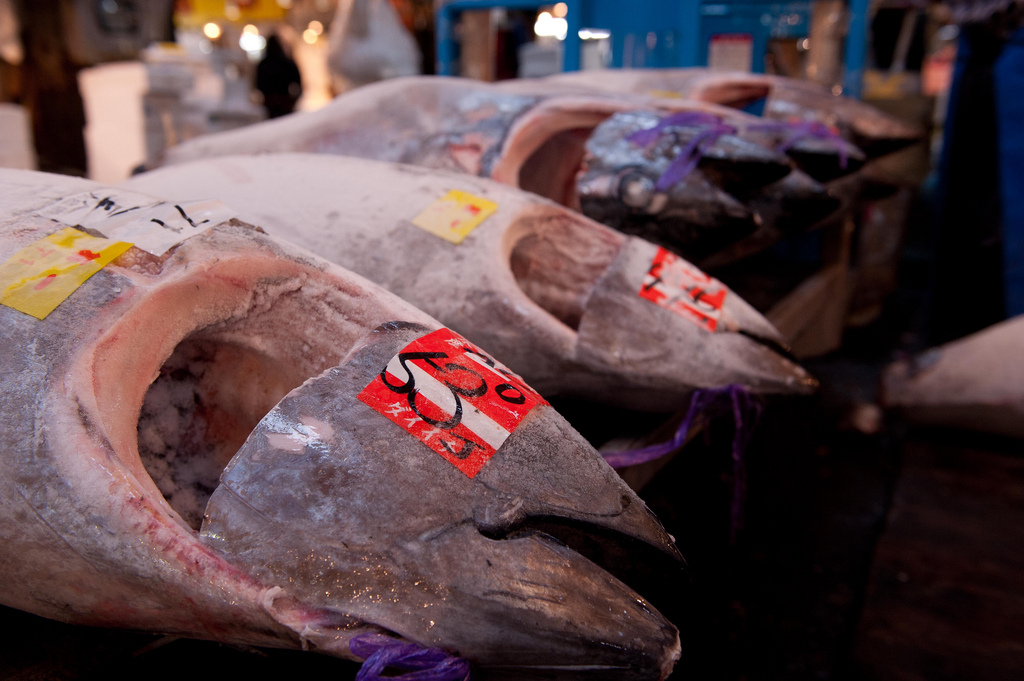 A recent auction of bluefin tuna at the Tsukiji market in Tokyo sparked recurring discussions over the environmental and economic effects that overfishing and big tuna businesses are putting on local areas and fisheries. This came as a 212-kilogram fish sold at Tsukiji for 74.2 million yen (or the equivalent $64,200), which per piece would cost over 25 times the 400 yen usually charged at the bidder’s restaurants.

As far as environmental claims have gone, the results of overfishing are putting stress on all levels of the food chain. This is partially due to the fact that 95% of caught Pacific bluefins are not yet old enough to reproduce, because they are being caught during adolescence. Economically, overfishing presents a multifaceted issue of matching supply with excess demand, which is leading to the commercialization of the bluefin. This presents many problems, as depleting resources of bluefin tuna are causing fishermen who practice sustainable fishing to not be able to meet their levels to provide a living for themselves or their dependents.

The auction revealed a few trends currently surrounding the bluefin tuna market. One such trend is the crowding out of environmental concerns by framing fishing for bluefin tuna as economically advantageous. For example, the extravagant cost paired with the publicity surrounding the Tsukiji auction served as a factor overshadowing the plight of the bluefin tuna and the calls for a two-year moratorium on fishing global populations. These calls have been made by projects like the Global Tuna Conservation, a subsidiary of Pew Charitable Trusts. In addition, the attitudes of Japanese officials have revealed that “short-term profits are being put ahead of long-term conservatism,” as Jamie Gibbon of Pew Charitable Trusts pointed out.

Environmentally, overfishing leads to a loss of biological diversity and can result in a reduction in species populations. On an exaggerated level, this can lead to the extinction of a species. Overfishing produces short-term economic gains, but it comes at the result of significant environmentally detrimental outcomes. In exchange, overfishing of top predators, like the tuna or grouper, has led to the growth in populations of smaller marine species, including sardines and anchovies. The consequences associated with overfishing even include threats to coral reef health, as marine communities are disrupted by the loss of a top predator. This results in decreased food security for many coastal communities, who rely on these species of fish for their primary source of protein.

The World Wildlife Fund (WWF) predicts that poor fishery management has resulted in detrimentally high levels of illegal fishing that have often gone unreported. Estimates made by the WWF figure that around 20% of the world’s catch of fish globally, with as much as 50% in some fisheries, is illegally caught and valued anywhere between $10-23.5 billion annually. Payouts from overfishing have resulted in a business that brings fishermen around $12 billion annually, with the final consumers paying restaurants and supermarkets up to $42 billion annually. Although the issue has been framed around bluefin tuna being economically advantageous because of their sizable payout, the environmental factors acting on the market could cause its long term viability to be shattered through overfishing.

In addition to excessive overfishing by larger companies and governments, if a catch limit or moratorium is not imposed, then less affluent nations may realize the value of their populations of popular fish and tuna. This would lead to further degradation of the species in stocks that have traditionally been managed sustainably. Essentially, this issue is an adaptation of the tragedy of the commons, as the tragedy of overfishing becomes a rational decision for some people, despite the environmental and economic impacts that are facilitated by it.

So, without major changes or developments in the practices surrounding overfishing of the bluefin tuna and other fish, the economic viability of such a trade will be reduced. As a result of overfishing, deeper environmental repercussions will be felt amongst the populations for decades to come. The culture surrounding the bluefin tuna will be diminished, further deteriorating the cherished history of it among Japanese societies. Unless major actions are taken in order to practice sustainable fishing and are paired with economically sound policies in trade, then the practices that made the bluefin tuna so highly valued will be the same factors resulting in its demise.