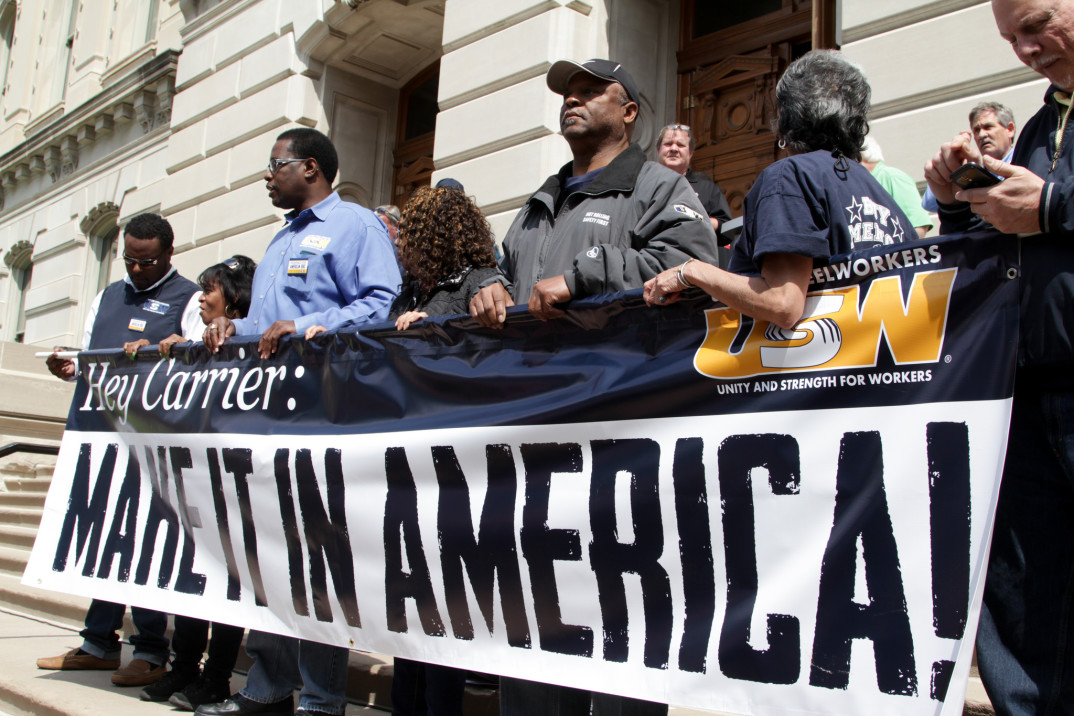 Opinions on these developments have been mixed. While some commentators have celebrated Trump’s use of the bully pulpit to shame companies into keeping jobs in the United States, others have questioned the unintended consequences of conducting economic and trade policy one company at a time.

One assumption that goes largely unquestioned, however, is that the goal of keeping jobs in America is worthwhile. Neither Hillary Clinton nor Donald Trump tried to defend during the campaign the practice of moving jobs overseas to lower labor costs. Trump campaigned to “make America great again” by imposing tariffs on goods made by Americans overseas. In turn, Clinton aimed to depict Trump as a hypocrite by, for example, releasing a campaign video of Trump on the Late Show with David Letterman admitting that many Trump-branded products were manufactured overseas.

While many positions are deemed off-limits in American politics, there are no sacred cows in philosophical ethics. It is especially important to examine the justification of value assumptions embraced by most of us and, therefore, taken for granted. Note that saving American jobs the Trump way is not a win-win proposition. If Carrier or Ford decide to keep 1,000 jobs in Indiana or Michigan, then 1,000 people in Mexico lose an opportunity to be hired for a good-paying job. No doubt the individual workers who avoided a layoff have cause to celebrate, and it would be callous to ignore what they have at stake in these policy disputes. But shouldn’t we have the same regard for Mexican workers’ needs?

On January 6, The Associated Press reported  some reactions from Mexican Ford plant workers after the news from Ford dropped. The article reported that “residents [in the town where the cancelled Ford plant was to operate] said the younger generation would be hurt most by the cancellation.” Retiree Ignacio Segura Rocha said, “They were already dreaming of going there (to Ford), and at the last minute there’s nothing.”

American jobs, one might argue, are generally better than non-American jobs. They are better compensated. American workers are better protected by safety regulations. American jobs provide better benefits. Companies ship job overseas precisely because they can reduce their labor costs by doing so. They can pay lower wages and worry less about costly regulations. Therefore, we should celebrate when Carrier jobs in Indiana are saved at the expense of Carrier jobs in Mexico. People are better off when they have high-paying jobs in well-regulated industries, and the practice of outsourcing jobs threatens that laudable goal.

The philosophically interesting thing about this argument is that it comes from an impartial point-of-view. That is, it does not assume that the interests of any one group matter more than those interests of another group. American jobs are not to be preferred because they are jobs for Americans. If a company closes a plant in the United States to open another one in, for example, Norway, where the workers may receive a higher wage and better labor protections, then the logic of this argument implies that we Americans should also celebrate such a move. I’m not so sure most champions of American jobs would want to accept this implication.

Historically, Western moral philosophy has tied the moral point-of-view to the impartial standpoint. That is, an action is immoral precisely because it is motivated by assigning more value to some people’s interests rather than others. I discussed similar ideas in an earlier post on Peter Singer’s concept of the expanding circle, which depicts moral progress in terms of people expanding their range of moral concern to cover all human beings and even sentient animals. However, the insistence in American politics on protecting American jobs at the expense of other countries seems to be primarily motivated by a bias in favor of American interests. It is an example of economic patriotism; Americans should exhibit loyalty to their fellow citizen by working to protect their jobs at the expense of non-Americans.

Herein lies the problem. Patriotism is considered a virtue. Patriotism presupposes a bias in favor of American interests. Yet, such bias conflicts with the impartial standpoint closely associated with morality. Can economic patriotism be moral? Alasdair MacIntyre has provided one way of answering this question affirmatively. For MacIntyre, morality is essentially the morality of a community. We all learn morality from the community that raises us, and the morality that we learn from our community is justified in terms of sustaining the way of life embodied in that community. We understand what it means to be a good person in terms of the concrete responsibilities we have as fathers, daughters, friends, and citizens, and the content of these responsibilities are culturally specific. “Detached from my community,” MacIntyre writes, “I will be apt to lose my hold upon all genuine standards of judgment.” Thus, patriotism is a central virtue of morality, for patriotism motivates the defense of the very community that sustains morality for us in the first place.

Certainly, MacIntyre’s view needs elaboration for a more robust defense of economic patriotism. For one, why is the nation state the preferred object of patriotism, rather than one’s religious affiliation, race, or local community? What relationship does patriotism have to less sanguine examples of in-group bias, such as indifference to the plight of refugees or Islamophobia? Conflicts between the demands of universal morality and group loyalties will continue to define politics in the years to come.