Seeds of Doubt: The Under-Regulation of Televangelism 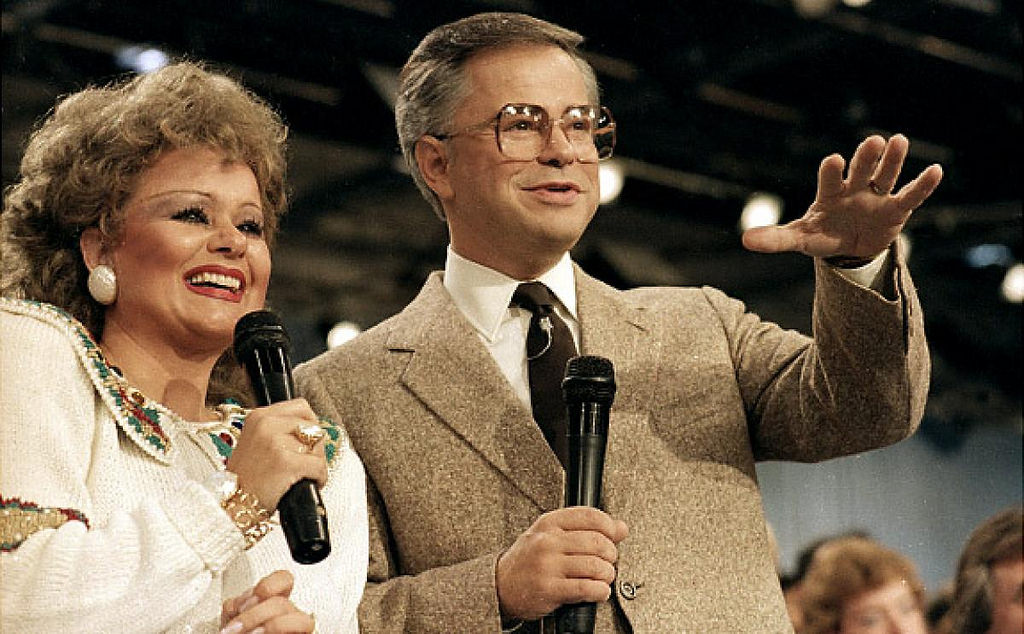 ” Tammy Faye and Jim Bakker during a PTL broadcast (circa 1986)” by Peter K. Levy via Flickr (Public Domain)

What if I told you that you’d have a miracle at this time tomorrow if you shouted “Fear not!” three times, counted down from ten and then called and sent money to a television network?

These were the exact instructions of one of the ministers during this year’s Praise-A-Thon, one of the Trinity Broadcasting Network’s many fundraising efforts that elicits donations across the country annually; the television network is one of the leaders in televised ministry and has provided an outlet for recorded and live services. Stakes are usually much higher, however, for contemporary televangelists; though their heyday has undoubtedly passed, these ministers still make millions in their pursuit of televised salvation.

A year ago, John Oliver reminded his television show’s viewers that televangelists still exist. In his segment on their work, Oliver’s criticisms ranged from the abject ridiculous religious claims to their techniques of eliciting donations (or “seeds”) from viewers, but focused on the fact that most televised ministries are able to collect massive donations tax-free under a remarkably vague article of the tax code.

To prove his point, Oliver created his own church (“Our Lady of Perpetual Exemption”) and accepted monetary and other donations. The fake–but legally real–church ended up raising tens of thousands of dollars before Oliver declared it closed. Despite the comedic angle from which attention was redirected toward televangelists, the impact of their work was felt by millions of viewers who actually prompted an investigation of the specific tax exemption referred to in the video.

Televangelists garner attention and following because of their radical opinions and methods, rather than despite them; infamous televangelist and convicted felon Jim Bakker recently claimed that Los Angeles would experience a deadly earthquake because the city voted largely for Hillary Clinton, and televangelist Rick Joyner claimed just weeks ago that president-elect Donald Trump not just resembles one of Jesus’s disciples, but all of them at once.

However, the majority of televangelists gain and sustain bases of followers because of two factors: their use of the prosperity gospel and frequently the physicality and “miracle” of their broadcasted Pentecostal evangelism.

The “prosperity gospel” is a simple but fundamental feature of the televangelist operation: the will of God is aligned with financial blessing, as it is God’s will for his people to be happy. Hence the “seeds,” as viewers are told that their donations are a seed that will eventually bear fruit in their own lives. The donations are made to the church or the speaker directly, both of which are tax-exempt.

Salvation, too, becomes simple among the acts and words of televangelists, as baptism, conversion, and rebirth are televised with a dramatic flair. Many televangelists claim to confirm people’s entry into God’s love with the push of a hand, and while it does indeed invite that individual into the church in question, there seems to be no stunt spared in the name of spectacle. Robert Tilton even was reported to have cured a viewer of AIDS when he touched his television screen during Tilton’s broadcast.

The problematic promise, however, comes from televangelists’ claimed healing powers. Spectators, donors, and participants in these televised religious events trust the word of televangelists that prefer they use their money to “plant a seed” rather than use that money to pay for their own medical needs, with the belief that God will find them well. Upon the direct advice of televangelists, individuals have refused treatment for and therefore died of complications related to cancer. A lawsuit was brought against well-known TV minister Oral Roberts in 1988 for $15 million in federal court by patients at City of Faith Medical Center, claiming fraud after Roberts never visited or “healed” them, and recently the major Trinity Broadcasting Network was accused from the inside of more than $50 million in fraud.

Despite this, televangelists can make thousands or millions of dollars, and sometimes can even afford private jets off of “seeds” and false promises—all on public television and with the grace of the Federal Communications Commission. Yes, the organizations are based in a legally recognized church and are protected by the First Amendment, but their donations do not have to be allowed on public television. In the same way advertisement, reference, and presence of tobacco products is regulated and banned on public television, the televangelism industry regularly targets a specific viewer base with sometimes-tragic success.

In terms of money collection, these churches inhabit the same legal space as charities, non-profits and other organizations that solicit money without promise of commercial exchange. According to the FCC, as long as the organization is not committing fraud as recognized as a criminal offense, then the programs are fit to broadcast.

But if individuals are promised health and their conditions deteriorate, if they are told that their credit card debt will disappear and it only grows–in other words, if the money they intended to spend on those life-saving costs are donated–then the church is not responsible, despite the fact that they are acting in a way that so resembles a corrupt but commercial enterprise.

It would be impossible to deny televangelists a right to broadcast, nor would it fair or legal. But to treat their costly promises as they are–transactions–could provide some sort of accountability for these megachurches.