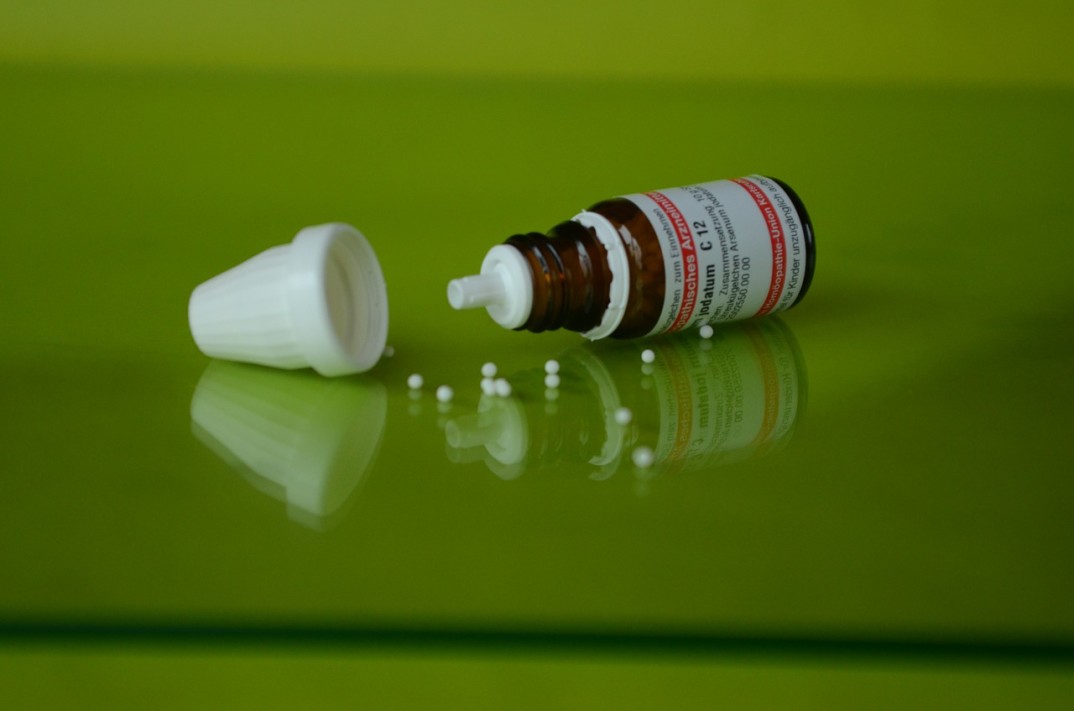 “Homeopathy” by Detco is licensed under CC0 Public Domain (via Pixabay)

Homeopathy, the medical philosophy that “like cures like,” is big business. According to the latest estimates from the Centers for Disease Control, $2.9 billion were spent in out-of-pocket costs by adults in the United States for homeopathic medicine in 2007. The medical philosophy of homeopathy, developed in Germany over 200 years ago, posits that any substance that produces certain symptoms in a healthy person can also be used to cure those symptoms in a sick person. Homeopathic cures introduce one of these substances to cure a person of their symptoms.

The amount of these homeopathic substances in a dose is often tiny, since homeopathy also claims that the smaller the dose the more effective the medicine. Over-the-counter homeopathic medicines are available in many drug stores like CVS and Walgreens, right alongside other over-the-counter drugs like Aspirin and Advil. These homeopathic medicines also claim to relieve symptoms of many illnesses, from allergic conjunctivitis to warts. Currently, the Food and Drug Administration (FDA) does not require distributors of homeopathic medicines to demonstrate the medicine’s efficacy in order to market them. In the FDA’s absence, the Federal Trade Commission (FTC) is stepping in. The FTC believes it has the authority to require that homeopathic medicines make it clear on their packaging that there is currently no scientific evidence that these products work. According to Richard Cleland, Assistant Director of the Division of Advertising Practices at the FTC, The FTC believes that “the consumer should have as much accurate information as they can before making purchasing decisions.”

It is hard to disagree with this moral rationale. We all want to make good purchases, and the more information we have about a product—how much it costs, how well it works, etc.—the more likely we are to make purchasing decisions that are in line with our goals. This does not mean, however, that boosters of homeopathic medicines have offered no resistance to the FTC’s new labeling standards. They have claimed that their medicines are more effective than the FTC’s labeling standard suggests and that the FTC’s policy is a double standard targeting homeopathy, while allowing other over-the-counter medicines whose efficacy is also unproven to remain untouched. Others have questioned whether the FTC has the authority to enforce such a policy.

There are also deeper philosophical issues raised by the FTC’s move concerning the appropriate limits of governmental power. Perhaps the FTC’s moral rationale, while reasonable in itself, does not actually justify their intended labeling policy. The FTC’s rationale makes a claim about what it would be good for consumers to have—accurate information—but does not specify who should be responsible for providing that good. Many liberal political philosophers have defended the view that a government should not promote any particular conception of the good life.

This idea is often referred to as “liberal neutrality” or “state neutrality.” (Refer to Section 3.1 in the entry on “Perfectionism in Moral and Political Philosophy” in the Stanford Encyclopedia of Philosophy for a concise overview of this idea.) In short, the government should not tell you how to live your life because respecting the autonomy of human beings means respecting their capacity to decide for themselves what is good and what is bad. Why would the FTC be interested in labeling homeopathic medicines as ineffective unless they intended to steer consumers away from making medical choices they deem “bad?” This treats consumers not as adults, but as children incapable of locating the information they need to make choices on their own and deciding for themselves what is good for them.

A few things are worth noting in response to this argument. First, the FTC is not proposing an outright ban on these products. No one’s freedom to continue to purchase homeopathic medicine is curtailed, nor is the government directly telling consumers what is good for them and what is bad for them. The standard is justified in terms of accurate information about the product, rather than in terms of explicit value judgments about whether homeopathy is good for you or bad for you.

Additionally, not only adults take homeopathic medicines. Children do, too. Many homeopathic cures are marketed for use by those under 18, and these are also easily available at neighborhood drug stores. Those detractors of homeopathy will warn that children can be harmed by these medicines if they effectively delay the time that a child gets treated by a conventional medical doctor or medicine. Given that “state neutrality” invokes autonomous adults in its justification, its applicability for whether the government can intervene to protect children is less straightforward.

It is a legitimate question as to how far we are committed to the state neutrality principle, and the case of homeopathic labeling standards provides one recent example of a policy that tests the scope of this principle. Though it is less controversial to conclude that labeling standards that aim to make consumers aware of the truth of the efficacy of a product do not amount to the government telling us how to live our lives, the FTC would not have developed these standards unless they thought they could influence some people to stop purchasing homeopathic medicines. A more difficult case for the liberal neutrality principle is whether the FDA should step in to pull homeopathic medicines off the shelves entirely until they prove their scientific worth. This is a case worth considering in more detail if the homeopathic medicine market continues to grow and pressure mounts for the FDA to step in and take a more active regulatory role.