Demographics, Refugees, and Immigration: What of the Expanding Moral Circle? 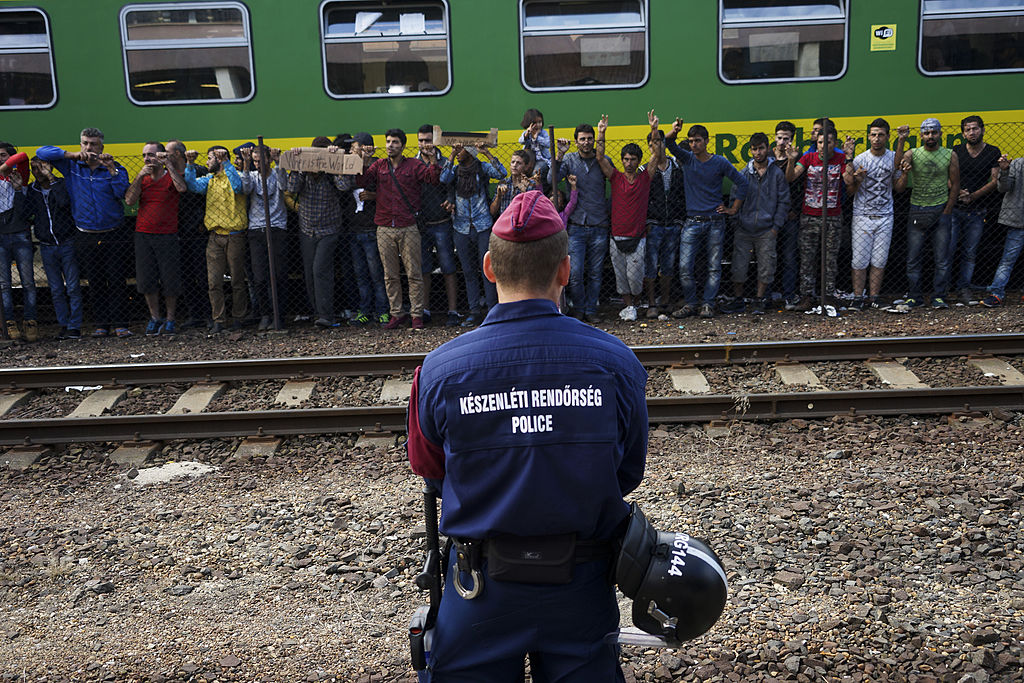 “Syrian Refugees strike at the platform of Budapest Keletri railway station” by Mstyslav Chernov is licensed under CC BY-SA 4.0 (via Wikimedia Commons)

Anxieties over changing demographics, immigration, and refugees have been a key theme in Western politics over the past couple of years. A central flashpoint in the political debates leading up to the Brexit vote was a controversial poster from the “Leave” Campaign, depicting a line of Syrian refugees. In the United States, reports of racist taunting and vandalism have increased since the recent election. France will vote in presidential elections in 2017, and the National Front’s candidate Marine Le Pen is projected to have a strong showing. The National Front has also been associated primarily with its opposition to immigration, specifically immigration from Islamic countries. More generally, political sentiments that reject multiculturalism and cosmopolitanism, in favor of nationalism and isolationism, have grown in popularity in both the United States and Western Europe.

There is no defending violence that is perpetrated against others purely because of their race, religion, or nationality. It is worth considering philosophically, however, what justification exists for the moral sentiments that are challenged by this general trend towards nationalism and isolationism. Peter Singer’s concept of the expanding circle is a helpful distillation of sentiments. This is a concept popularized by Peter Singer in his book The Expanding Circle: Ethics, Evolution, and Moral Progress, though many philosophers and peace activists have expressed or embodied similar sentiments.

Simply, the concept of the expanding moral circle expresses the thesis that, over time, our rational capacities lead us to include even more groups of people in our moral considerations of whose interests count. It is not just my tribe that has moral worth, but all humans have needs and interests that matter in my moral calculations. For Singer, this altruism has its basis in a genetically programmed drive to protect one’s immediate family and community, but it is our reasoning capacities that have lead us to expand that circle to include even more and more groups, such as those from different nationalities, religions, or ethnicities. The circle may even stretch farther to include sentient animals and the environment.

If universal altruism is rationally justifiable, as Singer claims, then we can look at recent trends to retract the circle to exclude refugees, immigrants, and others as irrational (and hopefully temporary). How does Singer’s rational process of expanding altruism proceed? Singer thinks that limited altruism is an evolved capacity in many creatures. We increase our own capacity for survival by helping those members in our group, who can in turn help us out later. We act altruistically towards our children because they carry our genes.

Humans, uniquely, also evolved abstract reasoning as well as linguistic capacities that enable them to make judgments. This reasoning capacity makes all the difference because it imposes on us a requirement of consistency. If I think I am allowed to steal your apples, but you are not allowed to steal mine, then the group I belong to may well ask, “What makes you so special?” Not any reason will do. “Because I am me” will not be readily accepted by the group. Singer argues that the reason offered must be disinterested. Thus, reasoning leads a group to develop a set of disinterested reasons that do not artificially inflate the value of the interests of any one member of the group over the others. But, the reasoning process does not stop at the level of justifying a morality limited to a group of people. This same process raises questions about the artificial distinction between people who are members of my tribe and people who are not. Thus, reason pushes us to develop a universal and impartial system of morality.

Political states may be constrained by a different set of norms than are individuals, and behavior that exhibits preference towards acting more benevolently towards some rather than others may be justifiable under an impartial moral system. Even Singer acknowledges that, given our natural propensity to care more for the well-being of our kin, an impartial moral system must make way for allowing such preferential treatment. Similar kinds of rational allowances may be made for political states in that we recognize that a nation ought to act primarily in the interests of its own citizens, rather than in the interests of everyone. A state may be permitted, even obligated, to restrict immigration or to ignore human rights abuses in other states if these actions are necessary for protecting the material interests of the state’s citizens.

One might argue that states have a hard-enough time protecting the interests and security of their own citizens; demanding that states also look to accommodate the needs and interests of a global populace would place too much strain on the current nation-state system that provides global political stability. Often it is these kinds of concerns that opponents of immigration voice. Increased immigration, it is argued, may strain the economy, and refugees may increase security risks. What is notable, however, is that these kinds of arguments essentially accept the basic Singerian premise that arbitrary distinctions between people are not valid reasons for excluding some from the moral circle. Arguments about security and economic decline both seek to justify certain exclusions impartially. Thus, rational engagement with these arguments that challenge further expansion of the circle or moral concern is called for, rather than writing them off as simply irrational.