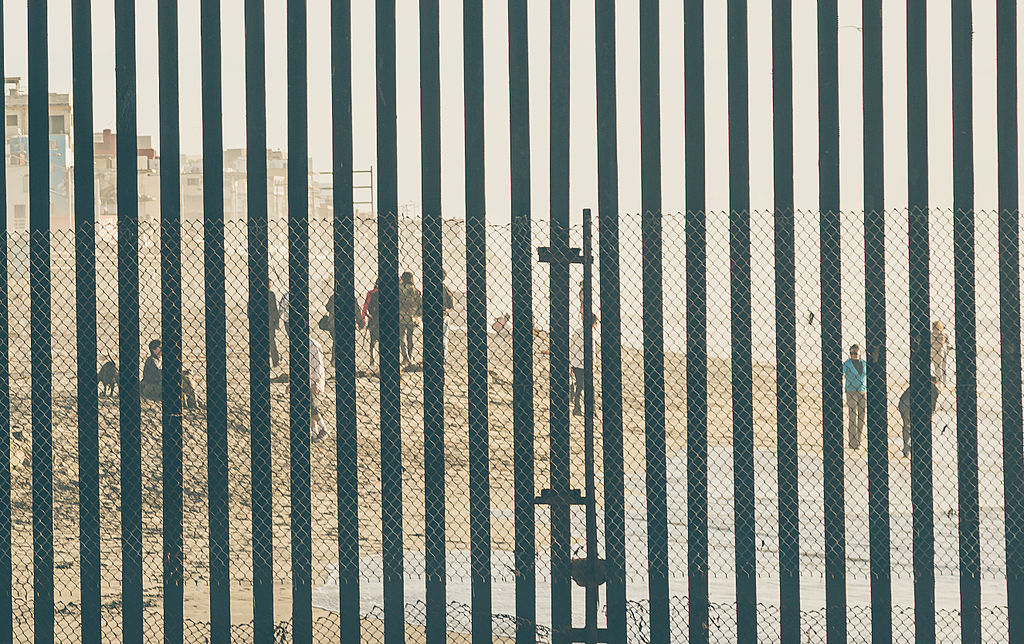 “US Mexico Border” by Tony Webster is licensed under CC BY 3.0 (via Wikimedia Commons)

Building walls to demarcate nation-state borders has been gaining political traction, as of late. The phenomenon of building walls is ultimately seen as a solution, and an easy answer for complex problems: a “if we can’t solve it, let’s just insulate ourselves from it” mentality is taking hold. In a recent op-ed for the New York Times, Tom Vanderbilt takes aim at the wall building phenomenon and dispels the metaphor–and promise–that president-elect Donald Trump used to bolster his campaign and appeal to voters: building a border wall on the Mexico-U.S. border.

Analyzing the resurgence of wall building across the globe, Vanderbilt recognizes that out of “more than 50 border walls in the world today; 15 were built last year alone.” Vanderbilt attributes these developments as largely “symbolic,” and as “political placebos”: “building a wall today seems more feasible than doing something about economic inequity.” Ultimately, Vanderbilt concludes that border walls increases insecurity, exacerbates problems and for the most part, they just don’t work; border walls are simply the material incarnations of our doubts and insecurities.

In Border Patrol Nation, a book, Todd Miller places these doubts and insecurities under the magnifying glass by looking at how they have already manifested themselves in the United States, in the form of increased border security; Miller seeks to unveil the rise of a surveillance state in the United States through the militarization of the United States’ borders. Understanding and examining the rise of what Miller calls the “border security industrial complex” in the United States will quickly reveal that there is no need for a wall because a far-reaching and expensive security apparatus is already at play, in and beyond the border. This development came about as a result of 9/11 when the Department of Homeland Security (DHS) underwent a major reorganization in 2002, “to safeguard the country against terrorism and respond to any future attacks.” As a result of this reorganization, the Customs and Border Protection Agency’s (CBP) mission–an agency of the DHS–shifted, from surveilling the border and stopping people from crossing illegally to: “preventing terrorists and terrorists’ weapons, including weapons of mass destruction, from entering the United States.”

In addition to the reorganization, the DHS’s jurisdiction increased dramatically to 100-miles within all U.S. coastlines and land borders, where, Todd explains, the CBP “can do a warrantless search on anyone who is within” this “de facto international border zone.” The expansion of the mission and jurisdiction of the DHS has led the CBP to outpace the “budget of all other federal law enforcement bodies combined,” Miller recounts, spending a total of $18 billion in 2012 on “border and immigration enforcement.” This is due to the fact that the CBP scope of responsibilities has expanded, requiring more equipment and manpower.  This exorbitant amount of spending has created a nascent private and public partnership that is devoted to creating what Todd describes as, “seemingly contradictory notions of a border opened wide for merchandise and cash flows, and a border that restricts the movements of people.”

As Vanderbilt argued, this new border zone has created immense problems, not only does it come at a great economic cost to the United States, but it has also become an “international humanitarian crisis”, according to the American Civil Liberties Union, who published a report in 2009, which states that more than 5,000 people have died trying to cross the U.S.-Mexico border. In addition, as Vanderbilt states in his op-ed, the militarization of the border has not dissuaded illegal crossings; if anything it has stopped migrants from leaving the U.S. at all, for fear that they will not be able to return to the U.S. if they were to go home. In a sense, building a wall and militarizing the border is just throwing money at a problem hoping that it will go away, mixed in very drastic and deadly side-effects.

Vanderbilt and Miller shed important insights on the Band-Aid approach that wall building is, and how it is a result of growing economic and security threats that plague the U.S. and the world. The truth of the matter is that economic and security threats are important and complex issues that directly impact the psyche and realities of many people, thus they should not be ignored by calls for open borders, which Vanderbilt and Miller appear to support–or by building walls. It seems that the root of the problem is that there is not any substantive political discussion or argumentation that aims to solve these problems. In part, this might be due to the fact that they do not manifest themselves physically, except in the fringes of America. Currently, each side of the argument that supports either building or bringing down walls fails to provide a far-reaching solution, but both succeed in representing the ills, insecurities, and dangers that people face in their everyday lives. Although, it is important to keep in mind that building walls does appear to systematically worsen the conditions of the people it seeks to keep out.

A more far-reaching problem is the fact that our current construction of citizenship, which rigidly determines who is a legitimate member of a nation-state, is ill-suited for our economic conditions. We live in a globalized economy that is always in flux and has no borders.This sentiment is clearly reflected in the frustrations of many Rust Belt voters, who largely voted for Donald Trump because they believe that they have been economically affected by globalization and immigration. As the sources of employment shift from one country to another or are disparagingly situated within certain countries, what are we to do? Why do we get to deny people but not the “market” from crossing borders so easily?