Beyond the Locker Room: Donald Trump and American Misogyny 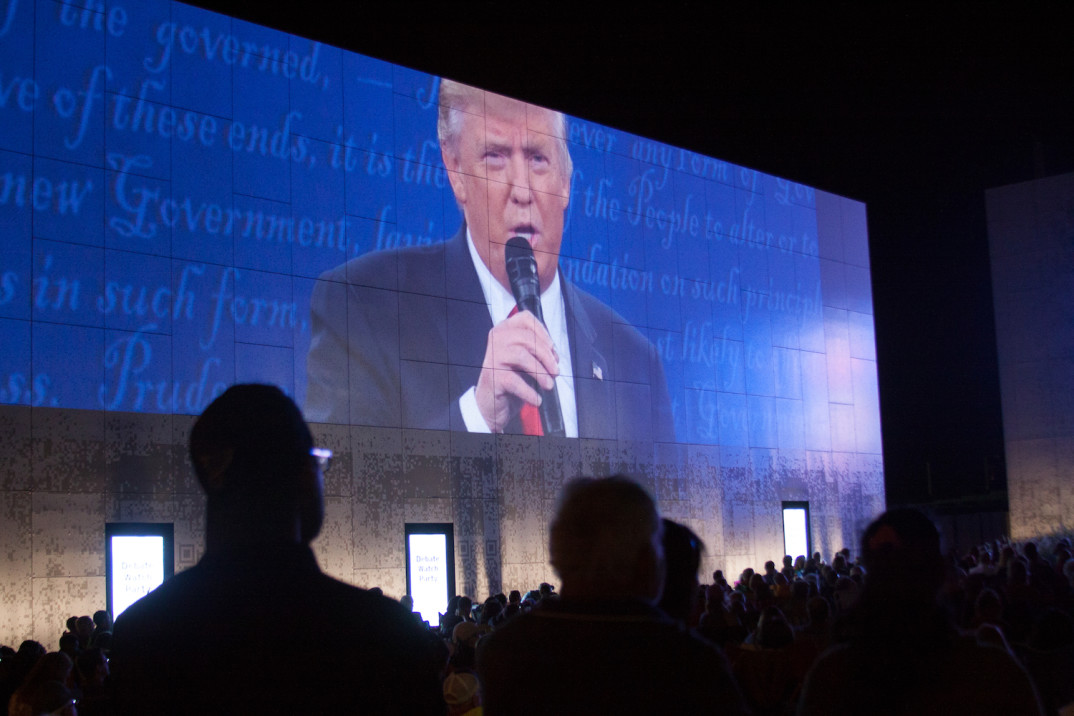 Only days before the second Presidential debate, a video of Donald Trump making misogynistic comments about women surfaced. The video is an excerpt of a conversation between Access Hollywood reporter Billy Bush and Donald Trump on an Access Hollywood Bus in 2005. Throughout the video, Trump can be heard recounting his attempt to seduce a married woman, and stating that he can “do anything” to “beautiful women” because he’s famous.  Numerous gendered slurs are used by Trump in reference to his sexual advances on women, which also sound a lot like sexual assault. The release of this tape was met with outrage by citizens and politicians alike. Despite this, mere minutes into the second debate Donald Trump brushed off his comments as “locker room talk” and admitted that he was “not proud of it”.

Following the debate, tweets from professional athletes challenged Trump’s statements about his lewd comments equating to “locker room talk”. Dave Zirin of The Nation responded to Trump’s comments in an article titled “Not in My Locker Room.” In his article, Zirin recounts his experiences in male locker rooms which he claims were relatively devoid of the intent or discussion of sexual assaulting women. Zirin claims that “It is because of people like Donald Trump that a locker room can become an incubator of rape culture.” But what are the implications of politicizing an issue like sexual assault? Does the phrase “people like Donald Trump” over-simplify the factors and people that are complicit in rape culture? And does Zirin’s article focus more on defending locker rooms than condemning Trump’s statements?

Some might point out that, regardless of his implications, Zirin admits that he can’t say that Trump’s “comments are alien to a locker room.” Zirin encourages men to challenge misogynistic speech and behavior. In response to rape culture, he states that athletes must “say loudly and proudly, ‘Not in my locker room.’” Zirin even acknowledges his past mistakes and how he has been a passive bystander in insinuations of sexual assault. Acknowledgement of problematic behaviors and beliefs is an important step in deconstructing misogyny and rape culture.

Additionally, a number of prominent Republican politicians have rescinded their support of Trump in lieu of his statements, including past republican nominees Carly Fiorina, John Kasich and even John McCain. The visceral and bipartisan reaction to Trump’s resurfaced statements shows a solidarity in the lack of tolerance for sexual assault. Nobody wants to be associated with a presidential candidate that seemingly bragged about sexually assaulting women, and this is beneficial for women and victims alike. And perhaps Zirin was correct in his assertion that it is “people like Trump” that enable rape culture, considering the numerous allegations by women of assault, harassment, and mistreatment against Trump.

One the other hand, some might argue that with Zirin’s implications and failure to address misogyny as a whole is problematic. In an article published on the Guardian, Suzanne Moore examines the prevalence of misogyny in American culture. She states that “The idea that men are suddenly discovering misogyny because of Trump is somewhat strange” and asks “Where have they [men] been?” Moore is angered and puzzled as to why nobody is addressing the overarching theme of misogyny that motivates and enables Trump to make such comments. In some ways, Zirin’s article embodies this lack of acknowledgement. He acknowledges the existence of a rape culture, but also implies that it is something that “people like Trump” are responsible for.

In this context, Zirin’s use of Donald Trump in discussing sexual assault could be problematic. Politicizing sexual assault and harassment risks making it an issue that can become politically obsolete. Over-simplifying the issue of sexual violence does not do justice to the complexity of the issue, and doesn’t accurately portray the victims and perpetrators. In some ways, Zirin’s article might even resemble the “Not All Men” argument that has been highly criticized in recent years. He fails to acknowledge that misogyny is deeply ingrained into American institutions and culture, and that it enables and fuels attitudes surrounding sexual harassment and assault. Instead, he uses his personal experience to defend the locker room experience.

Trump’s words and actions clearly showcase American misogyny. The question, then, is whether or not Trump is the product of a larger system of misogyny in America, and how we should combat sexual assault. Perhaps the solution lies beyond the “locker room”, and requires a closer examination of misogyny and American culture. Regardless, many would agree that Donald Trump’s statements about women deserve scrutiny. This consensus is a hopeful sign for the future of women in America.