In Ferguson, Divides Remain as a Community Moves Forward 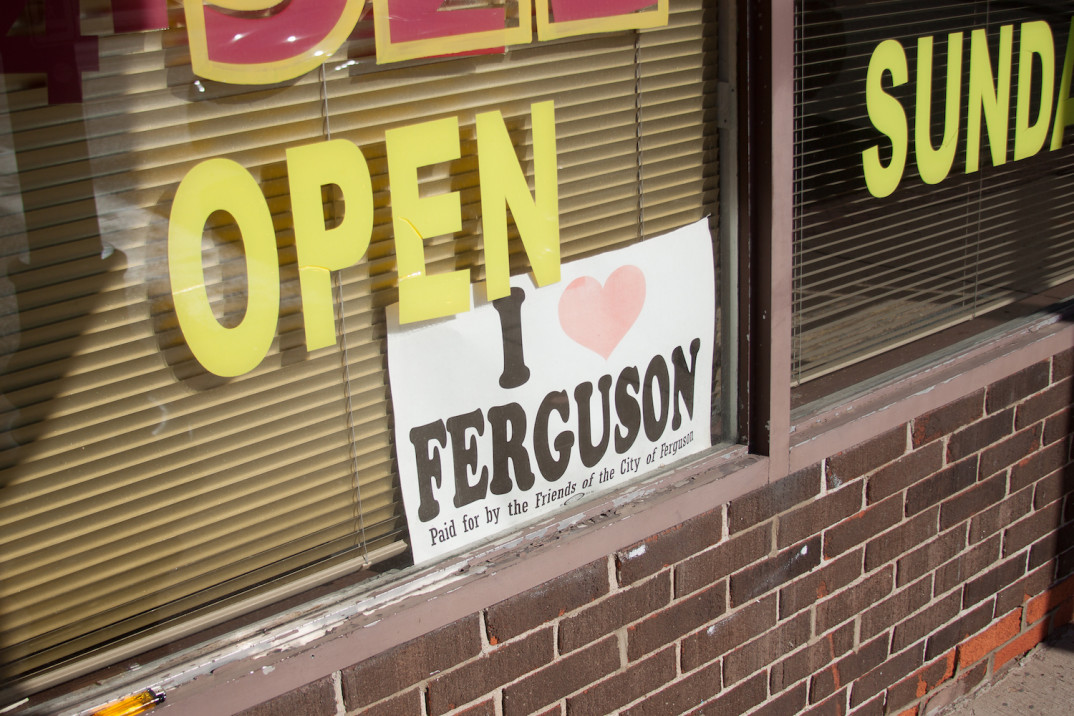 All Images by Conner Gordon

Bree, an African-American resident of Ferguson, Missouri, says he has been involved in activism for years. For the time being, that means selling buttons condemning the presidential candidates, namely Donald Trump, to passersby at a Ferguson strip mall. On a good day, he sells around 70 of the buttons, and, despite their politically charged content, he said rarely runs into any controversy – in majority black neighborhoods, at least.

“I keep myself in areas where my reception’s gonna be pretty cool,” Bree said. “Believe me, the whiter the area, the more of a problem I get.”

In some ways, Bree’s experience in Ferguson has underscored the racial divides the city continues to confront. In an interview with The Prindle Post, he expressed frustration that white people often react to him with fear, an experience he attributed to his race. Until recently, he also reportedly owed nearly $4,000 in unpaid traffic tickets – an echo of the Justice Department’s 2015 investigation into the Ferguson Police Department, which found that city officials routinely fined citizens for minor offenses to meet budget goals.

“Those traffic tickets, they were part of my life for damn near 15 years,” Bree said. “I didn’t have a legal license. That prevented me from being able to get jobs, from being able to do all types of shit. I’ve gotten arrested numerous times over these damn traffic warrants, and finally I was able to pay that shit off. See, this is the life experience white people don’t know a goddamn thing about.”

While Ferguson is not the only city grappling with shattered trust between law enforcement and communities of color, it has become synonymous with questions of race in America. Both Hillary Clinton and Donald Trump have campaigned on their solutions to such issues – one rooted in restoring trust, the other focused on law and order. Neither candidate, however, has yet to visit Ferguson – a fact that some of the town’s residents were quick to point out. As Clinton and Trump clashed in a debate just a few miles away, Ferguson’s citizens spoke about how their community works to rebuild, and what they believe both candidates should know about the suburb where Michael Brown was shot.

Beverley Franklin takes Isis, her medical service pit bull, to January-Wabash Memorial Park every day. Located just off of Ferguson’s North Florissant Road, the park marks a peaceful contrast to the images that have often defined the town – clouds of tear gas, burning buildings, a police line advancing under a lit sign that reads “Season’s Greetings.” For Franklin, it is environments like the park, with its fisherman-dotted pond and playground, that have defined her experiences living here.

“I’ve heard some things in the media that was very negative about Ferguson, and, of course from someone that hadn’t been to Ferguson,” Franklin said. “To meet some of the people and know what it’s like to be around some of the Ferguson people, I haven’t found any problem.”

Franklin first moved to Ferguson with her sister a year ago, after her high-rise proved too restrictive a living space for her dog. Since making the town her home, she has had positive experiences with “98 percent” of Ferguson’s residents. Nor has she had a problem with the town’s police; many of them, she said, know her dog by name, and have similar dogs themselves.

Franklin ultimately saw many parallels between the reputation of pit bulls like Isis and the stigma lingering over the town. “These are wonderful, intelligent dogs, you know… Just like I feel like Ferguson is getting a lot of bad rap that Ferguson shouldn’t get, so I feel the same way about these dogs,” she said.

Franklin’s comments represented a common thread in the interviews with Ferguson residents, many of whom strove to subvert the town’s stigma as a flashpoint of racial tension. William McElroy, another African-American resident of Ferguson, noted that the community was welcoming as a whole, with a few concentrated areas of crime that gave the town a bad reputation. While he sharply criticized the killings of black people by police, McElroy also noted that such killings had happened all over the country, and would continue “as long as Satan’s around.”

Promise Marie, an African-American resident of Ferguson, expressed similar sentiments, noting that Ferguson had its problems, but was a nicer community than the news media had shown. Like several of the residents interviewed, she stopped short of explicitly mentioning Michael Brown’s death and the protests that followed, instead noting that “that one situation happened and another one situation happened.” As for incidents of police brutality, Marie dismissed the notion that race played a factor, noting that the way individuals responded to police also played a role in such incidents.

Though many residents interviewed noted that Ferguson was more complex than how it was depicted after Michael Brown’s death, they also made clear that problems still remained. Bill Goldstein, a resident of Ferguson since the 1980s, said that he had noticed the city’s policing problems firsthand. “I hate to say it, I’ve known some cops, they were the kind who are the problem,” he said. “I went to school with some of them, graduated with them. Some of the wrong kind of people are going into policing, and I don’t know how you change that.”

Goldstein believed that the events of 2014 had led the community towards productive dialogue, a factor that had not existed before Michael Brown’s death. However, he also noted that many of the city’s problems defied a quick fix. “It’s been a racist city for a long time, ever since back before the Civil War,” he said. “And it’s slow to change.”

Susan Ankenbrand, a volunteer with the community organization, I Love Ferguson, noted similar problems. “I am not denying that there is some validity to what was said, and I think there are some policemen that probably needed to go,” she said. “We did have community-oriented policing, and how we moved away from it I’m not quite sure, but we did.”

Ank Ankenbrand, Susan’s husband and a volunteer with I Love Ferguson, said that the divides between the town’s white and black residents were shrinking, but still presented challenges. “Immediately after the shooting I think a lot of us were looking for a way to begin to heal, and it’s been difficult,” Ankenbrand said. “For white residents, the minute you said, Michael Brown, we had one impression. African-Americans had another reaction. The curtain came down. But I think we have long passed that, and we are still struggling.”

I Love Ferguson’s attempt to bring about community healing has proven controversial. In response to the protests, the organization helped organize fundraising for businesses affected by looting. The organization also sponsors events in the community, including an upcoming Halloween event near the apartments where Michael Brown was killed. Yet, as early as 2014, protesters have objected to the group and its aims, arguing that it cares more about the town’s image than its problems with policing. Ank disagreed, noting that his organization’s slogan “means we love our community, and we need to make changes, but let’s not throw the baby out with the bathwater.’”

Sandy Sansevere, the chairwoman of I Love Ferguson, agreed with Ank, arguing that the protesters largely came from other cities, acted like “anarchists” and interrupted the city’s attempts to foster dialogue. “They don’t want any authority whatsoever, in government or policing, or anything, and that’s their mentality,” she said. Sansevere also criticized the Justice Department’s handling of Ferguson’s problems, arguing that federal officials had not taken enough community input into account.

Ultimately, residents’ advice for Clinton and Trump reflected their assessments of the community – multifaceted, and in some ways, still divided. Many argued that, to truly solve the problems of communities like Ferguson, Trump and Clinton would need to visit. “They don’t get it. They do not come in and try and find out what actually the community needs or wants,” Sansevere said. Others, such as Marie, argued that concrete investments in rebuilding the community’s infrastructure and restoring shuttered businesses were needed. “Don’t just go down to Florida and build a whole block of houses and then come down here to St. Louis and just give a speech,” Marie said. “Treat everybody equal. Treat the neighborhoods equal. You see some trash, pick it up.”

Bree remained largely unconvinced by either candidate. On November 8th, he plans to write in Colin Kaepernick, the San Fransisco 49ers quarterback who drew national attention for kneeling during the National Anthem, as his choice for President.  “They (Clinton and Trump) are both from the same circles,” he said. “They’re both friends. They kick it together, they hang out together, they golf together. Their children literally hang out in each other’s homes and go to each other’s birthday parties, but yet we’re supposed to be believing that we’re really getting a different choice.”

Bree also expressed disdain for initiatives like I Love Ferguson, which he argued promoted dialogue that did little to make concrete changes for communities of color.