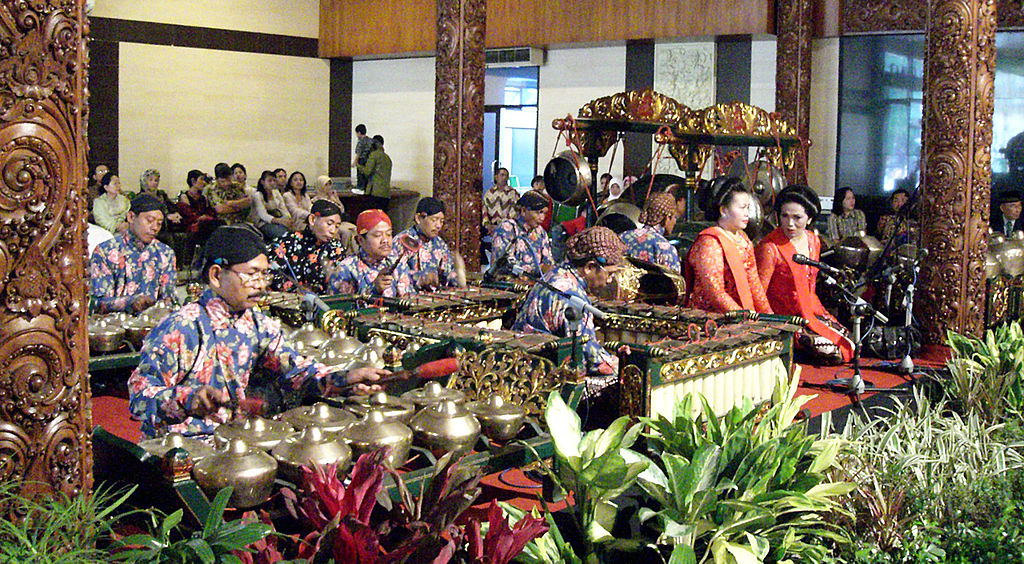 “Javanese Gamelan” by Gunawan Kartapranata is licensed under CC BY-SA 3.0 (via Wikimedia Commons)

The majority of the classical music we know and love today has been steeped in European traditions for generations. It is not uncommon, however, to see hints of other cultures within classical music composition. Sometimes this is done as an authentic ode to another culture’s music, but can also be exploitative if not done with proper knowledge and respect for the culture.

Famous Italian Romantic opera composer Giacomo Puccini has been especially noted for his use of so-called “exoticism” in his works. One of the most beloved composers of all time, Puccini was a huge believer in transporting his audiences to far-away places. For example, his 1903 opera, Madame Butterfly, takes place in Nagasaki, Japan, and tells the beautifully tragic story of a devoted geisha wife known as Madame Butterfly. Throughout, Puccini utilizes the pentatonic scale in the orchestration and vocal lines to represent Japanese culture. (If you are unfamiliar with the pentatonic scale, think the recurring nine-note melody from the 1974 Carl Douglas hit, “Kung Fu Fighting,” which utilizes the scale culturally in much of the same way Puccini does).

This repeated musical gesture came to represent Asia as a whole. Though perhaps a seemingly harmless way to set a scene on a deeper level, there are actually some issues worth addressing within this context. Perhaps most troublesome of all, Puccini was completely unfamiliar with any real Asian culture of the time; his knowledge was solely based off fantastical stories. The pentatonic scale was not actually a theme in Asian music, but rather an imagined representation of what Asian music should or might sound like. To a Western audience at the time, the music served its purpose. But in not ever actually studying Asian music, Puccini’s Madame Butterfly might be exploiting stereotypes of a very broad and diverse people.

French composer Claude Debussy is also known for blending the music of other cultures with his own styles. As a young child, he was introduced to Javanese gamelan music at the Paris World Exposition. On broad level, gamelan is ensemble music that originated on the Indonesian island of Java, and consists of varieties of gongs and other bronze instruments, as well as lutes, zithers, and flutes (though the intricacies of the music varies per piece or performance, as most styles tend to do). Debussy fell in love with this style of music, and was inspired to use its elements in his own piano music compositions later on in life. Though this style was also borrowed, Debussy’s music can perhaps be looked at in a different light from Puccini. As opposed to Puccini, Debussy was actually quite familiar with the style of music he pulled from. Debussy’s music reflected an actual appreciation and understanding for Javanese gamelan, rather than simply imagining how it might sound as a stereotypical representation of an entire culture.

Some have argued that worrying too much about potential accusations of cultural appropriation can actually hinder the creative process, and discourage composers and artists from drawing on non-Western inspiration. Cathy Young of the Washington Post asserts that “culture cops” can stifle creative professionals, and make it rather impossible to incorporate any non-Western art forms without receiving criticism for it. She also suggests that accusations of cultural appropriation are so often subjective that sometimes it is difficult to distinguish when a line might be crossed.

Though clearly problematic in classical music, perhaps there ought to be more leeway for modern-day composers. A quick Google search can provide information about practically any musical style from around the world, and even pull video and audio recordings. Since music and art have become so accessible, perhaps artists should be free to take whatever they like, and use it however they like. In this regard, if any information is available to anyone, they should be able to use it appropriately, with no excuse for not being conscious of the original tradition. Still, it is worth questioning how this freedom might reflect the history of Western colonialism, as majority groups have often felt free to take what they please just because they have the capacity to do so.

Additionally, it is critical that we are able to examine classical music from an objective standpoint. Beloved works in the classical music repertoire might have more cultural implications to them beneath what is easily seen. It would be a stretch to say that all music that has ever exploited a stereotype of an underrepresented culture should be completely eliminated. It is evident in just comparing Puccini’s and Debussy’s use of non-Western music that there are ways to incorporate inspiration from other cultures with respect and dignity, but also to do so in a way that exploits stereotypes of a culture. However, it is important to understand how cultural appropriation has been used throughout classical music history so history need not repeat itself.