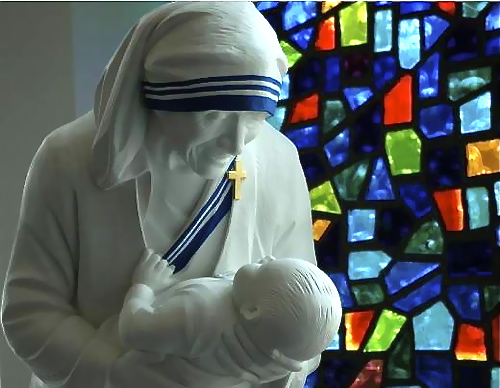 This past week at the Vatican, Pope Francis canonized Mother Teresa, making her officially Saint Teresa of Calcutta in the Catholic tradition. For years, many Catholics have considered the famous nun a pseudo-saint for her dedication to helping the world’s poor.

However, even a saint has her critics. Some former volunteers from Mother Teresa’s Missionaries of Charity do not believe she deserved to be granted Sainthood after their experiences working for her congregation. Hemley Gonzalez spent time volunteering at Mother Teresa’s home for the dying, Nirmal Hriday, in Calcutta (now known as Kolkata), and was greeted by deplorable conditions and an extreme lack of healthcare training. Gonzalez likened the facilities to “a scene out of a World War II concentration camp.”  Other critics are skeptical about the use of donations raised by facilities in India and other countries around the world and ask why a group who raises so much money in donations is still working out of subpar facilities with unsanitary conditions. Gonzalez believed “They get a free pass because of religion; they get a free pass because of the influence of the Vatican.” Since Mother Theresa died in 1997, some are asking how much responsibility should be placed on her for more recent complaints regarding her facilities.

Additionally, progressive and feminist groups from around the world found Mother Teresa’s staunch opposition to abortions, contraception, and divorce jarring. However, it is important to note that the Vatican and her devout Catholic followers traditionally mirror the Saint’s sentiments. Some critics have shared accounts of Mother Theresa pushing both her morals and religion on those she assisted. In the canonization process, the individual in question must be considered responsible for two miracles after their deaths to be eligible for Sainthood. Mother Theresa’s healing of two sick individuals are considered miracles by the Catholic church, but some non-believers are skeptical. As Mother Theresa is a Catholic Saint, it raises the question of whether criticisms by non-Catholics should carry the same weight.

NBC reached out to Missionaries of Charity to address these criticisms but were told “No responding to criticism. Thank you. God bless you. Goodbye,” by one representative. However, some Mother Theresa’s loyal followers are speaking out in support of the Saint’s actions and achievements during her lifetime. One volunteer for the Missionaries of Charity responds to Gonzalez’s criticisms of Nirmal Hriday by saying “all these claims are rubbish. These critics are actually lying.”  Sunita Kumar, a personal friend of Mother Theresa, agreed, saying “she didn’t want to start a five-star hospital or anything like that” but believed that the facility did more good than harm. Kumar-who is both Hindu and Sikh- also refuted rumors about Mother Teresa’s prejudice against non-Catholics, saying “she looked after everybody in the same spirit, whether they were Muslim or Hindu or Sikh.” Although it is possible that those currently associated with Missionaries of Charity are afraid to share criticism for fear of jeopardizing their own reputations.

Arguably one of Mother Teresa’s biggest supporters, Canadian priest Reverend Brian Kolodiejchuk, was one of the major players in her canonization process, which started two years after her death. He knew Mother Teresa firsthand and is also a member of Mother Teresa’s Missionaries of Charity Fathers, which explains why he was appointed as the main promoter for her sainthood. He explained to the New York Times that one of his main duties during the canonization process was to document miracles performed by the late nun. He addressed critics’ concerns that the miracles were not fully legitimate by explaining, “they’re quite strict on these things. In Brazil, a postulator I knew on another sainthood cause received the news that the miracle case he had put forth was rejected, so it’s not automatic.”

Kolodiejchuk also looked into accusations of the substandard conditions in Missionaries of Charities facilities and believed critics are mistaken in those claims. He also acknowledged that, while some Indians are unhappy with Mother Teresa for creating a reputation of poverty in Kolkata, she did bring awareness and assistance to the area. Considering the canonization process is now complete, it seems unlikely that newly revealed criticisms will have much impact at the Vatican.

Regardless of criticisms, Mother Teresa was canonized and is now officially recognized as a Saint. Interestingly enough, many of her critics came out of the woodwork in recent years, after her death. Some may say that individuals currently working for Missionaries of Charity deserve the brunt of the blame. While some identify as Catholics, it appears most critics come from other faiths.

As Mother Teresa’s legacy enjoys much support from the Vatican and greater Catholic population, some may say that non-Catholic viewpoints should not be taken as seriously. Despite naysayers, Missionaries of Charity and their supporters vehemently stand by the canonization, although it is possible they fear possible repercussions  if they do not hold a unified front. Most importantly, since Mother Teresa has already been declared a saint, it does not appear that the Vatican will give much weight to more recent critiques. Critics and supporters alike agree that Mother Teresa may not have been perfect, but does a person need to be perfect to be deserving of Sainthood?