Negotiating with Terrorists in Colombia 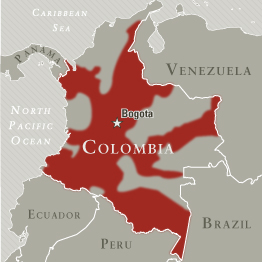 Beginning as a Robin Hood-type of organization fighting for land reform on behalf of peasants living in rural areas, the FARC tried to replicate what Che Guevara did in Cuba.  As they began to get involved in the drug trade, the ambitions of revolution were traded in for profit, although they still claim the title revolutionaries.

March 23rd marked the passing of the deadline to sign the final negotiations between the FARC and the Colombian government. Distrust existing on both sides of the negotiations are pointed to as the main reason for the passed deadline. While the Colombian government is weary of not having a clear roadmap with a set timetable for the disarmament, the FARC does not feel secure in laying down their weapons in fear of another round of anti-leftist violence against them in the 1980s and 1990s following failed negotiations.

One of the main criticisms comes from the former president of Colombia, Alvaro Uribe, who believes that these combatants are getting away with murder. The reintegration of rebels and removal of landmines is also costly. However, the ongoing violence could be more costly in the long run.  Economically speaking, analysts believe that growth would double if it was not for the armed conflict. The Colombian Research Center for the Analysis of Conflict even believes that such a negotiation would “strengthen formal employment, hasten poverty reduction and improve the quality of life.”  As for the immediate costs of negotiations, President Obama has asked Congress to approve the $450 million in aid to help with the cost of removing landmines as well as other post-conflict efforts.

In trans-formative justice theory, it is about finding the balance between the demands peace, justice and the ability to coexist. Ultimately, it will be up to the people to decide what the outcome of the negotiations, as it will be put to a vote through a referendum.  While the Colombian people are angry about the years of violence caused by the FARC, is it time for reconciliation? There’s a lot of healing left to do, and having successful negotiations could be a good first step.  While they may have missed the March 23rd deadline, it is in the best interest of all parties- the government, FARC and the Colombian people- to continue working towards an agreement.

Melissa graduated from DePauw University in 2016 where she majored in Political Science and Spanish, dedicated her time to leading the Sustainability Leadership Program and playing saxophone. She is from Greenwood, Indiana, and now works in Washington, D.C.
View All Articles By Melissa Guerrero
Related Stories