The Dangers of Partition as Peace 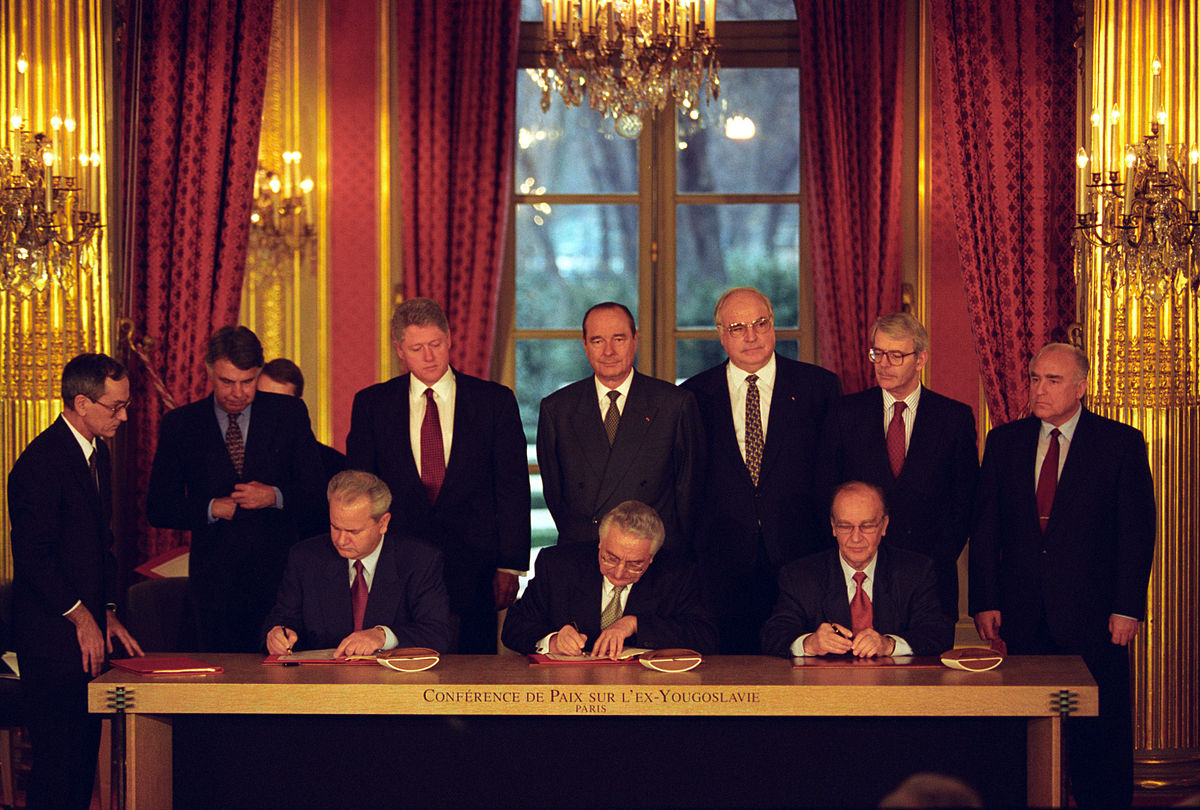 The glass façade of Kosovo’s parliament building is no stranger to the impact of rocks. A tall wedge of grey and blue, the building stands in the center of downtown Prishtina, Kosovo’s largest city and capital. The square it inhabits is usually a peaceful space, filled with strolling couples, street musicians and men selling neon plastic pinwheels to passersby.  Yet, in recent months, clashes between protesters and riot police have also gripped the downtown, once again pulling the country into the international spotlight.

The protests playing out in the streets of Prishtina began within the parliament itself. In October 2015, Vetevendosje, one of Kosovo’s largest opposition parties, started setting off tear gas in the parliament chamber. Their protests, aimed at an extensively negotiated deal with neighboring Serbia, brought the government to a halt and inspired the sometimes-violent protests that dominated Kosovo’s public discourse for a number of months. While opposition activists have a number of disagreements with the deal, their foremost objections focus on the creation of the Association of Serb Municipalities, a coalition of ethnic Serb-majority towns scattered throughout majority-Albanian Kosovo. Under the agreement, Kosovo’s Serb-majority towns would have the right to elect representatives to their own assembly and presidency, granting them significant autonomy to administrate matters independent of the country’s government.

The Association of Serb Municipalities is only the newest approach addressing the complex ethnic relations left in the wake of Kosovo’s war with Serbia in 1999. Yet the visceral and enduring backlash to the agreement in Kosovo’s public discourse suggests a notion making itself clear throughout the former Yugoslavia: partitioning ethnic groups to promote long-term peace carries with it dangers manifold.

Common sense dictates that warring parties should be separated before reconciliation can occur. From the grade-school classroom to the international negotiating table, this logic reigns supreme: bring fighting to an end by disentangling the involved groups, then work towards an agreement for peace. Yet carrying this policy beyond the negotiating table to form a foundation for post-conflict reconciliation has proven particularly controversial – no more so than when the separated parties are ethnic groups living within the same state. Ethnic partition, the separation of ethnic groups through administrative or state borders, is only one example of how such policies may be managed. Yet the notion of partitioning conflicting ethnic groups has proven particularly controversial.

Some scholars have defended the use of partition in certain cases, noting that relatively vibrant multiethnic societies are unlikely to reemerge after the horrors of ethnic cleansing. Partitioning the ethnic groups involved, it follows, acts as the most realistic option for societies struggling to recover from bitter ethnic conflict. Yet ethnic partition brings with it problems of its own; other scholars have argued that ethnic cleansing, which involves the forced relocation or killing of ethnic groups, tends to be legitimized by ethnic partition policies, making their use ethically untenable.

The controversy surrounding ethnic partition is no clearer than in Bosnia and Herzegovina, a country that has existed in a state of partition for just over two decades. Established by the Dayton Accords in 1995, Bosnia’s partition between Republika Srpska, an entity designed for ethnic Serbs, and the Federation of Bosnia and Herzegovina, shared by ethnic Croats and ethnic Muslims (Bosniaks), helped provide the foundations for the end of a war marked by widespread atrocity. By simultaneously granting Bosnia’s ethnic groups degrees of autonomous self-government and creating power-sharing structures between the entities, such as a three-member Presidency, the Dayton partition has been credited with bringing a speedy end to the ethnic cleansing and mass killings that had torn Bosnia apart for nearly four years.

At the time, many saw the Dayton Accords as a remarkable, if imperfect, step towards lasting peace in Bosnia. Yet, even today, Bosnia’s troubles have been referred to as a frozen conflict, with widespread political instability, economic stagnation and resurgence of ethnic identity in the country’s political discourse. Such trends have only been worsened by periodic crises, such as Republika Srpska president Milorad Dodik’s repeated attempts to hold referenda questioning the legitimacy of Bosnia’s central government. Analysts have seen Dodik’s actions as attempts toward independence for Republika Srpska, a move that would bring the Dayton Accords’ administrative partition to a destabilizing conclusion. And while experts have suggested that such independence bids are unlikely to occur, they nonetheless lay the foundations of instability that continue to plague Bosnia’s prospects as a multiethnic state.

The ongoing instability in Bosnia can be traced directly back to the precedents that the Dayton Accords set. Contrary to the hopes of the international community, for example, ethnicity remains a potent force in Bosnian politics; reinforced by the Dayton Accords’ emphasis of ethnicity as a central organizing factor, political parties have used ethnic discourse to ensure a guaranteed voting base. This primacy of ethnic discourse has contributed to the actions of politicians like Dodik, who have found it in their interest to reinforce the ethnic identifications that played into the war in Bosnia in the first place.

In addition to incentivizing the resurgence of ethnic discourse in Bosnian politics, the principles of partition echoed by the Dayton Accords have helped erase the overlaps that exist between the warring parties. Prior to the outbreak of war, Bosnia was the most ethnically diverse republic in Yugoslavia, with thousands of ethnically mixed marriages and widespread instances of ethnic groups peacefully living together. The myriad of Catholic churches, Orthodox cathedrals and mosques throughout Sarajevo, Bosnia’s capital city, still reflects this diversity. Yet the diversity and intermixing of ethnic groups is not recognized by the Dayton Accords; rather, the agreement treats the ethnicities of Bosniak, Serb and Croat as distinct and separate, a portrayal only reinforced by the territorial partition policies it created.

Certainly, post-war ethnic relations in Bosnia were hardly the same as those that existed before the conflict broke out, and there is no telling how (or if) they would have healed under a different agreement. Yet the partition-leaning structures put forth by the Dayton Accords have not allowed multiethnic society in Bosnia purchase to regrow. Nor do Dayton’s partition policies sufficiently address the ethnic tensions at the root of conflicts like Bosnia’s – tensions that, in themselves, feed off of constructions of difference between groups. By embracing these differences as organizing factors, the partition elements of Dayton have set forth a Bosnian state in which separation between ethnic groups, rather than the commonalities between them, is of primary emphasis – a trend that, for those like Dodik, makes the complete partition of the Bosnian state, and the instability that comes with it, seem a foregone conclusion.

Countries like Kosovo have much to learn from Dayton’s effect on ethnic relations in Bosnia. Just as in Bosnia, relations between once-warring ethnic groups in Kosovo – ethnic Albanians and ethnic Serbs – have been strained since the end of the 1999 war. In recent years, in particular, the gaps between these groups has continued to widen; surveys of Kosovo’s youth, the largest sector of the country’s population, have revealed that only 40% of ethnic Albanians have even met an ethnic Serb, for example. In part, such statistics recognize the fundamental reality of post-ethnic conflict societies, where lingering distrust and insecurity frays at the roots of multiethnic communities. Yet policies that uphold the spirit of ethnic partition, such as those used to rebuild Bosnia, do little to amend, and may even encourage, these widening gaps.

Both Kosovo’s political elite and the international community, then, must be aware of the dangers that ethnic partition stands to inflict on post-conflict societies. While such policies may ease questions of self-determination and solve problems of governance, they ultimately fail to address the root of ethnic conflict: constructions of ethnic identity built on difference and exclusion. Overcoming these issues in a post-war society is particularly difficult, as the citizens of countries like Bosnia and Kosovo are no doubt aware. However, solving the problem by simply separating the parties does not do enough to address the fundamentally othering forces that necessitate such policies in the first place. Fostering reconciliation, and not ethnic partition, then, is fundamental in giving multiethnic societies in countries like Bosnia a fighting chance.