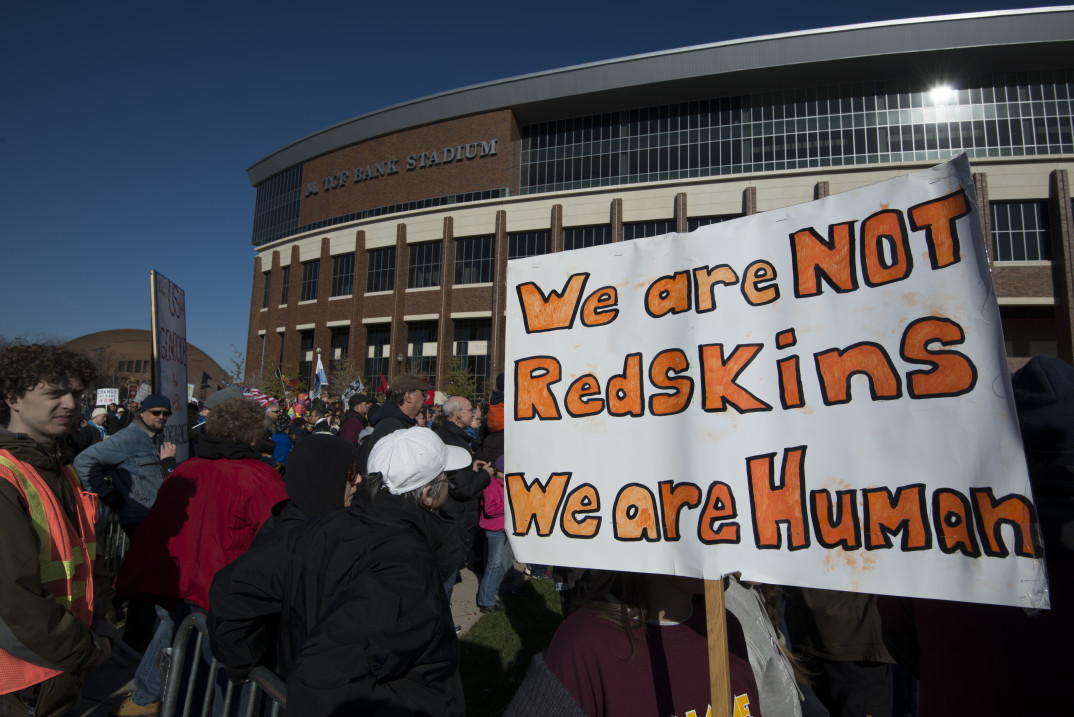 Halloween has just passed, and it is clear that public discourse on culturally sensitive and appropriate costumes continues to increase. These discussions about cultural appropriation are particularly prominent amongst America’s educated youth, who are on their way to becoming the next generation of leaders and advocates against racial discrimination. This heightened awareness is now slowly but surely making its way towards the world of sports.

Much like cultural appropriation for Halloween costumes, Native American imagery for sports mascots borrows symbols and names from a culture and may infringe upon indigenous intellectual property rights. In recent years, a push has been made against sports teams, at the high school, collegiate, and national level, who continue to utilize these symbols for names, nicknames, mascots, and logos. At the national level, the Cleveland Indians baseball team has begun to wean away imagery of their Chief Wahoo logo (a Native American male with a red face, large goofy grin, and red feather on his head) in favor of a bold letter C logo.  Other institutions at the collegiate level have also followed suit. In June of 2012, the state Board of Higher Education voted to get rid of the University of North Dakota’s “Fighting Sioux” moniker and Indian head logo, and the university has since been without a new team name or logo .

Some institutions, however, have resisted this change. The Washington Redskins NFL team has made minimal effort towards changing the team’s name and mascot despite the potentially problematic and racially offensive use of the term “redskin” . The Chicago Blackhawks NHL team has similarly resisted the idea of eliminating their name and mascot, particularly in light of recent Stanley Cup victories that have created vast praise for the team and increased visibility of its name and Indian head imagery . The team has both publicly and privately connected with the local Native American community for education and philanthropy, but is that enough to justify the continued use of their name and imagery?

In an effort to eliminate cultural appropriation by sports teams and raise awareness of these racial issues, Adidas announced in early November that it is starting a new initiative to eliminate racial imagery from high schools, approximately 2,000 of which in the U.S. currently have Native American mascots.  The initiative would give high schools wanting to change their mascot access to the brand’s design team, who would provide logo and uniform design services. This initiative is ushering in a new era of brand accountability and public visibility to an issue that has previously been seen as “tradition”.

Not surprisingly, there is strong opposition to these changes to sports teams. Critics state that this issue is focused too heavily around political correctness and that Native Americans are, in fact, being honored as being brave, stoic, and signifiers of a fighting spirit.

Others, however, argue that these traits are based upon stereotypes of Native Americans as savages. This issue is particularly problematic in the context of America’s youth, especially those who identify as Native American and must grow up trying to rationalize their place within a society in which their race is an appropriate mascot for a high school, university, or even national sports team. In light of this discussion, do we have an obligation to eliminate all Native American imagery from sports teams? Will future generations be more conscious of and sensitive to issues regarding race if we make this change?