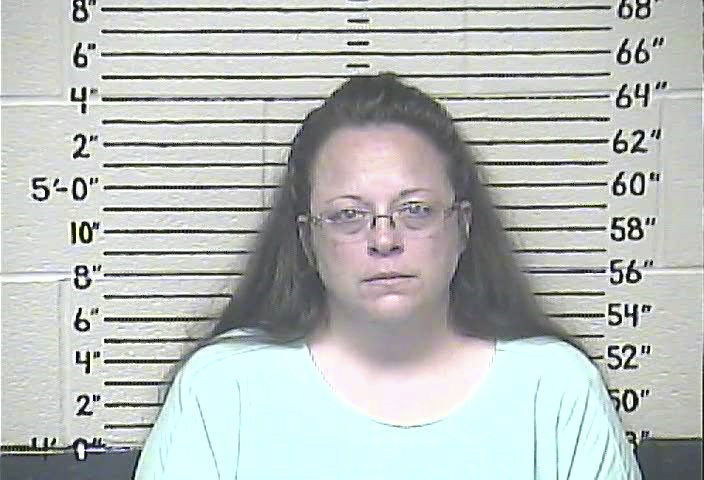 Kim Davis, a county clerk from Morehead, Kentucky, was jailed recently for refusing to issue marriage licenses to a homosexual couple and two heterosexual couples on religious grounds. “I never imagined a day like this would come –“ she says, “- where I would be asked to violate a central teaching of Scripture and of Jesus Himself regarding marriage. To issue a marriage license which conflicts with God’s definition of marriage, with my name affixed to the certificate, would violate my conscience.”

For background reference: Davis’s refusal to issue marriage licenses on August 1st set into motion a slew of lawsuits and court orders in support of both sides of this controversy. On August 31st, the Supreme Court ruled that Davis was legally required to perform all facets of her job, including issuing marriage licenses. After being denied exemption, Davis did not return to her position as county clerk, but did instruct her fellow employees to continue denying marriage licenses to homosexual couples. Following Davis’s hearing on September 3rd, the judge sentenced her with contempt of the law and ordered for her to be imprisoned.

This story has been gaining traction in the news as many conservatives, including presidential candidates Mike Huckabee and Sen. Ted Cruz, are speaking out in protest of Davis’s incarceration. She’s been dubbed a civil rights activist and conservatives are heralding her efforts to protect her religious freedoms. Davis has become symbolic of the fight against the “judicial overreach” practiced by the Supreme Court. Conservatives believe the recent ruling has the potential to infringe upon individuals’ freedom to practice their religion, as protected in the Constitution.

Kim Davis’s actions have been compared to those of Rosa Parks, who remained seated at the front of the bus in defiance of a law she believed to be unjust at the time. Many have expressed offense at this comparison, claiming that her actions were simply those of civil disobedience. Melanie Eversley from USA Today writes that “Civil rights leaders say Davis is more comparable to segregationists such as George Wallace, the former Alabama governor who used religion as a reason to practice discrimination.” Many popular figures are also coming out against Davis including: former NBA player Kareem Abdul-Jabbar, Van Jones (civil rights activist and former advisor to Pres. Obama), as well as a number of comedians, actors, and news anchors.

Davis took an oath to uphold and comply with every measure of the law, including those with which she was in disagreement. In light of her incapacity to issue the marriage license on legal grounds, it would have been appropriate for her to resign from her position. The outcome of her legal battle and consequent incarceration could set a precedent for religious freedom and its influence. One thing is for certain, the debate surrounding her case has by no means run its course.