A Rose in a City Square 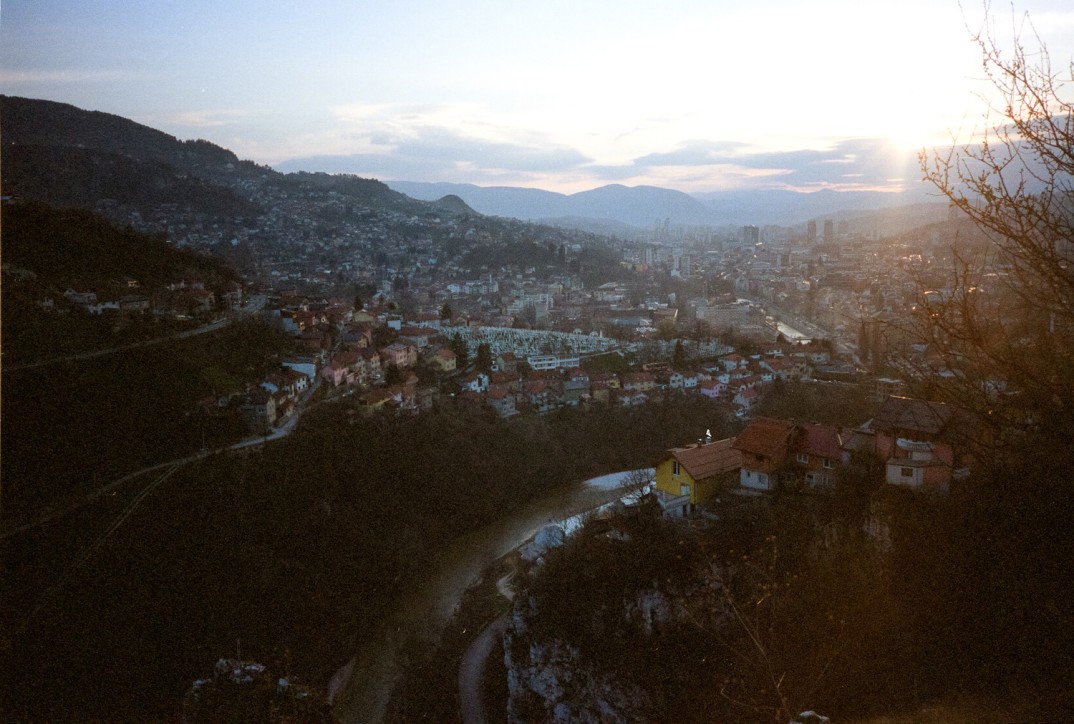 The view from the White Fortress. Image / Conner Gordon

Before that point, Bosnia-Herzegovina was always an abstraction to me. As a child, I had heard its name mentioned in passing at a church fundraiser, leaving me with images of a war-torn state in some unknown corner of the world. And, beyond Galloway’s book, little had changed by the time I first decided to study there.

It felt surreal, then, finally walking the streets I had spent so much time reading about. Part of me wanted to see the locations the book’s characters had inhabited: the Sarajevska brewery, where Kenan would travel to collect water, or “Sniper Alley,” where Dragan hopped from intersection to intersection to avoid shots fired from the hills surrounding the city. I wanted to know this place, to understand what had gone on here. But now I was here. No longer could the insulating pages of a book partition me from the trauma experienced in this city.

The rain that had swept in earlier had just let up, so my friends and I ventured out into the street. We had just come from lunch, a heaping portion of cheese pastry and yogurt eaten at a nearby restaurant. We stopped to wait in a square near the Old Town, a large cathedral to our back and the southern hills of the city in front of us. By most indications, it appeared to be a normal city square. Yet a discolored patch of asphalt stood out among the feet of passersby. Within it, a faded crimson, circular pattern with droplets radiating out from the center lie immortalized in the sidewalk.

It was a Sarajevo rose. Named for their flowery appearance, the memorials were created by filling in some of the city’s many mortar impacts with a bright red resin. There was one here, in the center of the square, and another around the corner, on a side street near the cathedral. Hundreds of them dot locations all over the city, anonymously marking the spots where three or more people were killed by mortars fired from the hills. To memorialize each spot, each single person killed by explosion or by bullet, would overwhelm the city with the perverse blooms. So their growth was limited to the sights of greatest atrocity, while the rest of Sarajevo stitched its wounds and rebuilt itself around them.

Without a careful eye, it could be easy to remain unaware of Sarajevo’s violent past. Yet signs like the roses still remain. A few hours earlier we had walked past Markale, an open air market where a mortar killed 68 people in 1994. The day after that we would walk by the Jajce Barracks, where the grenade pockmarks in the pavement were still raw and unfilled. And two days later we would hike to the White Fortress on the hills surrounding the city, taking in the sunset a few hundred meters from the former Bosnian Serb front lines.

We were inhabiting these spaces as students, yes. But being here also felt strangely voyeuristic. We were staying in the Old Town, leaving the hotel after lectures to explore the tourist stalls and winding residential streets. We were eating in the city’s famed ćevapi stands and drinking cherry brandy in its bars. In short, we were being college students on a semester abroad. We were trying to learn, but also to enjoy our time, to take in a city for what it is and not just what defined it twenty years ago.

Doing so was a luxury that those of Sarajevo have not had. It was the luxury to compartmentalize this horrific conflict into an academic box, to partition it as separate from everyday life. My group members and I could ignore the history of Sarajevo if we wanted to, removing it from daily consciousness. We could ultimately fly back to our homes and leave it behind us as an academic experience, or a voyeuristic attempt to “see the world.” While we were trying our best to understand this conflict and its legacy, it was never a legacy we would have to live.

Still we waited in the square, glancing occasionally at the rose. Were we right in noticing it, in fixing this painful scar at the center of our gaze? What experiences were we missing through this lens, what traces of life flickering at the periphery of our vision? What right did we have to occupy these spaces as students and tourists, where so many resisted and so many others died? What right did I have to inhabit the same city as the real life Kenans and Dragans, whose legacy I mostly knew from a novel on the Oprah’s Book Club List?

We stood there in silence, looking between the buildings at the southern hills that were once home to such terrible chaos. A group of teenagers walked through the square in front of us, one of them coming to a stop on the outer petals of the red splatter. If they noticed the rose beneath their feet, they certainly didn’t make it known.

They were probably sixteen or seventeen and, like us, too young to remember the siege. I wondered if they were from Sarajevo, if that splatter meant the same thing to them as it did to us.  I wondered whether the rose registered in the minds of the other people walking by, or if they noticed it at all.

I cannot know what those passersby were thinking, or what they had experienced in their lives. Nor can I say why so many chose to pass the rose by without acknowledgment, to avert their eyes from the tragedy it symbolized and go about their day. But I certainly do not blame them.