What Should You Do in the Face of Moral Disagreement? 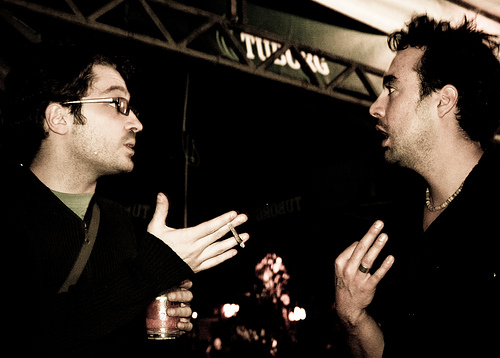 Are we entitled to trust our moral judgments over the judgment of others? That is the central question taken up in this article by Ben Sherman, a philosophy professor at Boston University.

Sarah McGrath, philosophy professor at Princeton University, argues that we should be very worried about moral disagreement. Sherman examines McGrath’s argument, and then makes the case that perhaps things are not as bad as McGrath thinks.

McGrath’s argument relies on two assumptions. The first is that we ought to give the opinions of people we regard as epistemic peers equal weight to our own. Epistemic peers are people whom we have reason to think are equally smart and informed about a particular subject. Disagreement with them should cause us to revise our own opinions.

The second assumption she relies on is that we ought to regard any other person as an epistemic peer with respect to moral matters. Because we have no independent way to identify moral experts, McGrath argues that we should regard anyone as epistemic peer on moral issues.

Those two assumptions taken together ought to make us be very worried about whether or not we have a right to any of our moral opinions in the face of disagreement.

Sherman rejects this latter assumption, and offers several reasons why someone might be able to not regard some people as peers on moral issues.

There are a variety of situations involving beliefs about non-moral in which we can identify possible biases people might be experiencing. Sherman argues that we can recognize these in cases of moral disagreement and sometimes be in a position to judge that someone is not a peer on moral matters. Sherman says,

there are a wide range of intellectual errors that are hard to escape, or even spot, without specialized training, including cognitive biases, implicit prejudices, misunderstandings of statistics, predictive errors and uncharitable interpretations of positions. It seems to be widely accepted in the relevant fields that people are prone to confirmation bias, endowment effects, unconscious stereotyping, hasty generalization and the straw man fallacy, to give a few examples.

The possibility of these kinds of potential errors might give us reason to think we shouldn’t automatically regard anyone else as a moral peer.

But it’s important to note that we would need to examine ourselves carefully to spot these potential cognitive errors in our own case. If we can reasonably believe that we’re not experiencing these biases, and we can’t as easily determine whether someone who disagrees with us isn’t experiencing these errors, then perhaps treating them as a peer shouldn’t be the default.

What do you think? Is McGrath right? Should moral disagreement lead us to reconsider our moral opinions? Should we default to regarding anyone as equally qualified to judge on a moral matter? Or is Sherman right? Do we sometimes have reason to favor our own judgments over those who disagree?