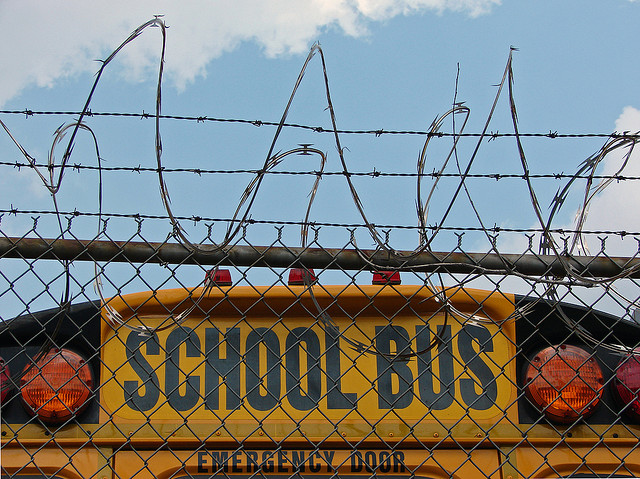 In honor of this week’s Kids for Ca$h documentary screening, it might be good to revisit a school policy with the potential to land misbehaving children in jail: zero tolerance policies.

In his post discussing the ethics of these policies, Jay G. Cone discusses three normative ethical theories and how each of them can be applied to policies in society.  The first of these theories is consequentialism, or evaluating the goodness or badness of an act based on the outcome of that act. When applied to zero tolerance policies, consequentialism asks whether zero tolerance policies produce results that are more favorable in comparison to the absence of the policy.  The fear produced from these policies might be enough to decrease the percentage of behavior issues; however, it’s important not to only look to statistics to inform our ethical platform.

In deontological theories, another area of normative ethics, the ethics of the actual act itself (in terms of rules or duties) is evaluated.  With the case of zero tolerance policies, this would mean assessing whether it is ethical to have zero tolerance for the misbehavior of children.  Zero tolerance in this sense, means no messing up and no mistakes.  Is the act of disabling children from the possibility of making a mistake (more than once) the right way? According to the rules of schoolyard nonviolence, the answer is yes.

Finally, the third category of virtue ethics focuses on “the habits and character of the individual, and evaluates choices and behaviors on the basis of whether the action is consistent with virtue.”  Through this ethical lens, zero tolerance policies capitalize on the tendencies of youth to act out, cause trouble and misbehave. While these misbehaviors are not ideal, they might be a reality of an individual’s process of growth, learning, and development.  Is forcing a child to abide by a zero tolerance mindset the best way to teach them how to be moral and to make virtuous decisions?

While it might seem as though zero tolerance policies are unethical, the reality of the matter is that these policies are alive and well in the world of education.  Schools have adopted these policies as a response to high bullying rates, hoping that taking a “one strike and you’re out” approach will scare children into behaving.  The reality of this situation, however, is that zero tolerance means zero learning.  Regardless of the deontological plea that misbehavior is “wrong,” disabling students to learn from their mistakes does not help them in the real world; in fact, it is anti-educational.

Do we want kids bringing guns to school and hurting other children? No. Of course not.  But what message are we sending if set the bar of behavior so high that they cannot reach it? Zero tolerance policies are a school’s response to a post-Columbine behavior dilemma. Is it the right response?

Decide for yourself: Join us on Tuesday, November 4th at 7 PM in the DePauw University Prindle Auditorium for the screening of Kids for Ca$h, a riveting documentary exposing the injustice, which lead 3,000 students to unlawful incarceration as the result of a school’s zero tolerance policy.