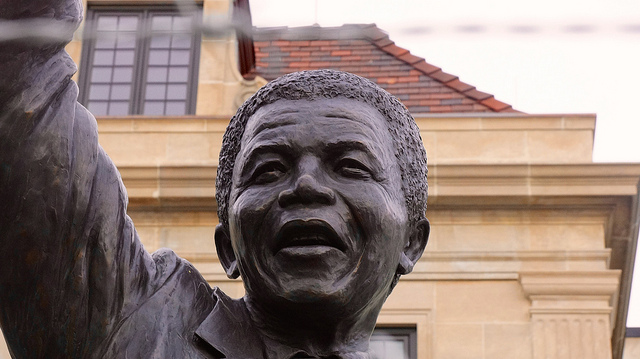 Carolyn Holmes, ’06, asked this question at last week’s symposium on the life and legacy of Nelson Mandela. The answer may not be as straightforward as you think.

For decades, Mandela has been a symbol of justice, hope and dignity for the nation of South Africa. His devotion to the African nationalist cause and his unwavering struggle against the inherent injustice of apartheid reveal his truly extraordinary character. He spent twenty-seven years in prison for his activism. Upon his release in 1990, he picked up right where he left off and began working with the government to eliminate apartheid and institute multi-racial elections. He became the first black president of South Africa in 1994.

Mandela served one term as president before retiring from politics to lead a life of philanthropy, continuing to work for an improved South African society and further establishing himself as a well-respected world figure. Peter Limb, one of Mandela’s biographers, spoke at the symposium and emphasized that despite the obstacles he faced, Mandela retained an unrelenting sense of humor and an unmatched amicable demeanor.

Holmes explained that when we talk about Mandela, we typically perceive him as a symbol for South Africa’s transition to democracy. He very much was this, but understanding someone as a symbol is different from understanding him or her as an individual rooted in a specific historical and cultural context. In Limb’s words, “We need to remember Mandela as a whole, not an air-brushed version of him.”

Mandela gracefully stood up for his beliefs in the face of extreme adversity, a rare feat that took an almost unfathomable amount of courage. However, we must acknowledge that Mandela was still only human; there was only so much that he could accomplish. While most of the world reveres Mandela as a saint-like figure, many black South Africans do not share this sentiment.

Despite Mandela’s efforts, little has changed in the past few decades for many citizens in South Africa. Protests and strikes over low wages are not uncommon, and police brutality remains an issue within society. There is still significant economic divide between black and white South Africans. Reconciliation has not been easy. As the panelists at last Friday’s symposium suggested, it might be the case that Mandela’s aspirations for South African society were too great, too visionary for South African society to manage, at least in the short-term.

Since most of us are removed from the historical and cultural context of South Africa, it can be easy to accept Mandela as a symbol and leave it at that. But that wouldn’t be the whole picture.

In an article for The Atlantic, Natasha Joseph describes the contrasting opinions that South Africans have about Mandela, “To those who cling to him as a sort of talisman, he is an icon, a deity sent down to save us from ourselves…To others, Mandela is no Jesus. He is more like Judas, betraying his cause and his people for the 30 silver pieces of power.” This quote suggests that the answer to Holmes’ original question is that different people talk about different things when they talk about Nelson Mandela.

These differing views are important because they call us to deconstruct Mandela’s symbol status and to examine more closely Mandela’s life and career, the realities of South African society and South African politics today. We can do this while continuing to recognize the value and significance of Mandela as a symbol.

Going beyond a simply symbolic perception of Mandela is a way to better understand his legacy, to continue striving for the values that he professed and to advocate for the type of change that he sought to establish.